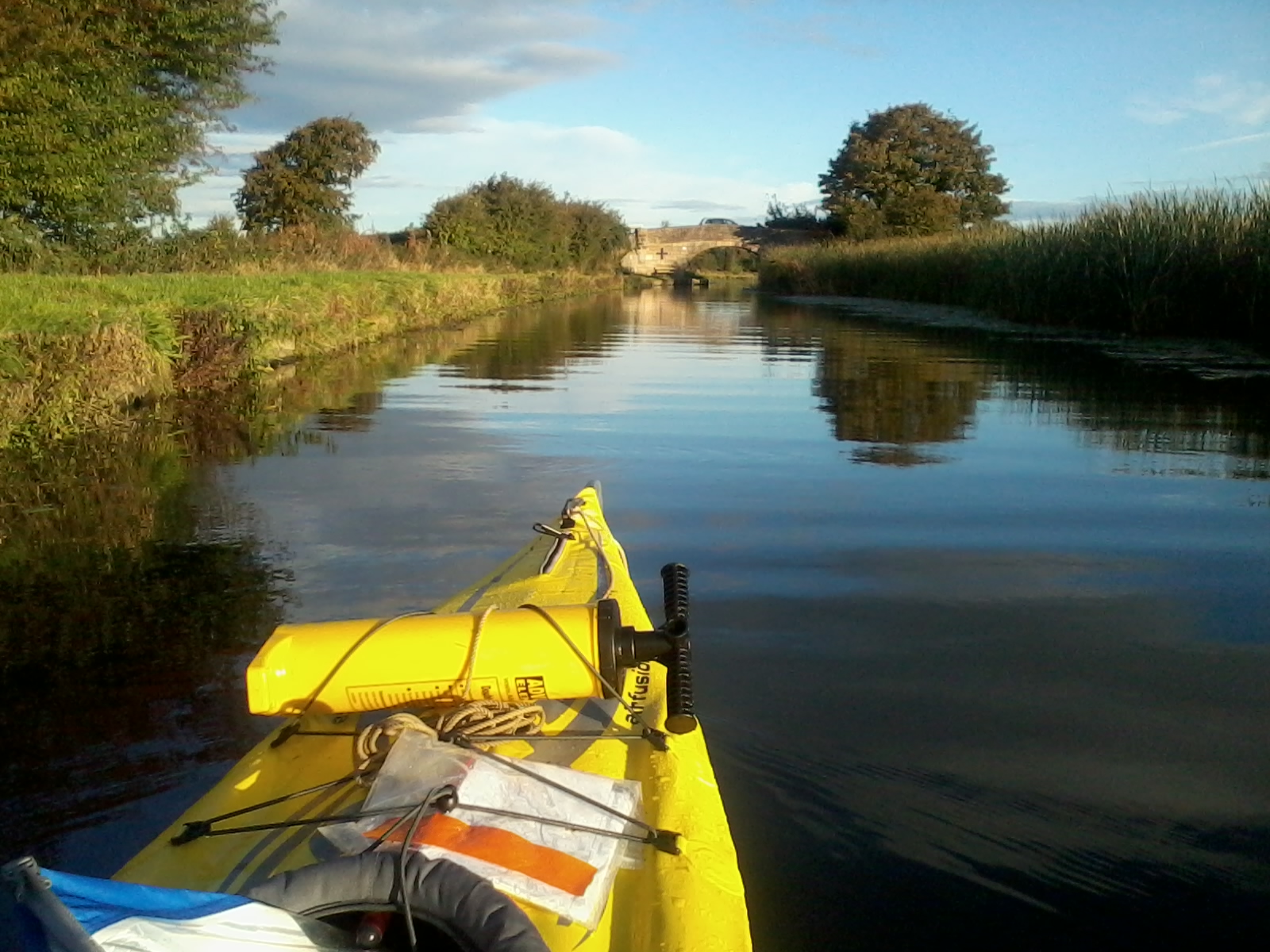 Up at dawn - not particularly early in mid-autumn - and skipped breakfast to get on the water. Round the first bend I had to limbo dance under one of the frequent swing bridges. Just enough room to slip the kayak under if I lay myself to one side, stopping myself from capsizing by hanging off the beams. Meanwhile cars and trucks rumbled over the bridge and over me.

A chilly morning, but clear and I was warm paddling. The easterly - so head- - wind brought my speed down to almost exactly 3 miles an hour, enough to overtake, slowly, any walker merely ambling, and keep pace and chat with anyone striding out fairly briskly.

The town of Maghull provided breakfast. I landed at a swing bridge, took the wheels off the kayak deck and put the kayak on the wheels. A few minutes fiddling with straps and I was on the road. I found a café in pedestrian street, parked the kayak outside the window and fueled up.

Back on the water I began noticing the flotsam. Mostly autumn leaves. But also two coconuts, several miles apart, tens of dead rabbits, in one short stretch and hundreds, probably thousands of plastic drinks bottles. The bottles were everywhere, floating on the water, deep amongst the rushes, caught in weed, embedded in the banks. Thousands of them in the miles I paddled during the day.

Kingfishers. Saw lots of them. A sparrowhawk Stukka-ed overhead, twisting in mid-flight as it came over a country bridge, dipped down to the canal and then saw me and veered off.

A fisherman pulled in his line as I paddled up. I apologised. He didn't mind, he said, as he was packing up anyway, happily, too, as he'd just caught an eight pound pike.

More swing bridges - most high enough for some more limbo dancing, some so high I could paddle under them normally.

In the late afternoon, cold and tired, I landed on the quay of The Farmers Arms by bridge 31 and parked the kayak in the car park in view of the widow - as I was unloading the questions started. Where was I going? To Goole? Coast to coast? How long was that going to take? Where did I sleep? Is that an inflatable kayak? How much does it weigh? The talk went on in the bar as I knocked back a few pints and a large plate of fish and chips.

People watched with interest but perhaps not envy as I launched again around eight and set off into a fine drizzle.

There's a joy in night travel. The sky reflected in the water. Strange gurgles and splashes. Paddling through the town of Burscough, between the lights and shadows. One group dining by the window of a canal side restaurant saw me passing like a ghost and waved madly.

Back into the darkness. Paddling on. A sighting of a wider stretch of towpath and a bench past bridge 35. Pulled out, set up camp, slept. Though woke in the middle hours. The sky had cleared. I saw what I thought was a rolled up pair of socks I'd dropped on the towpath. But then the socks moved. A hedgehog. 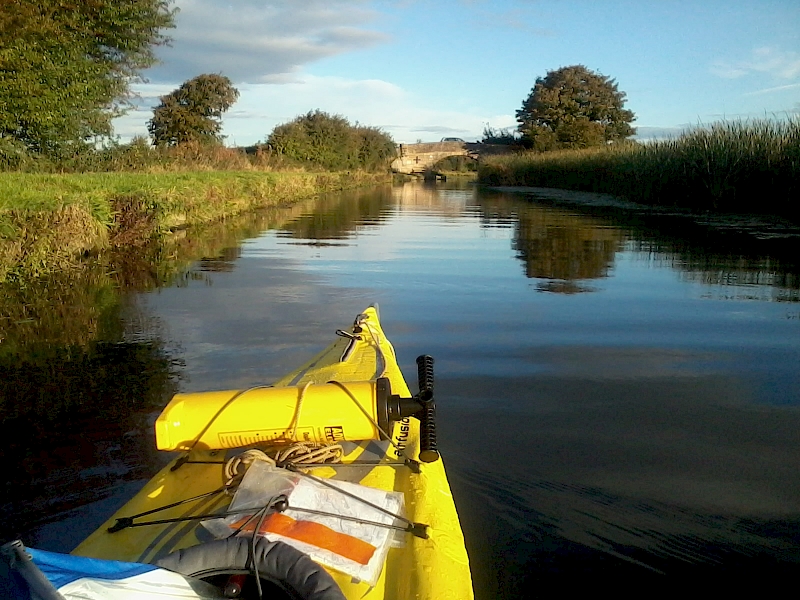 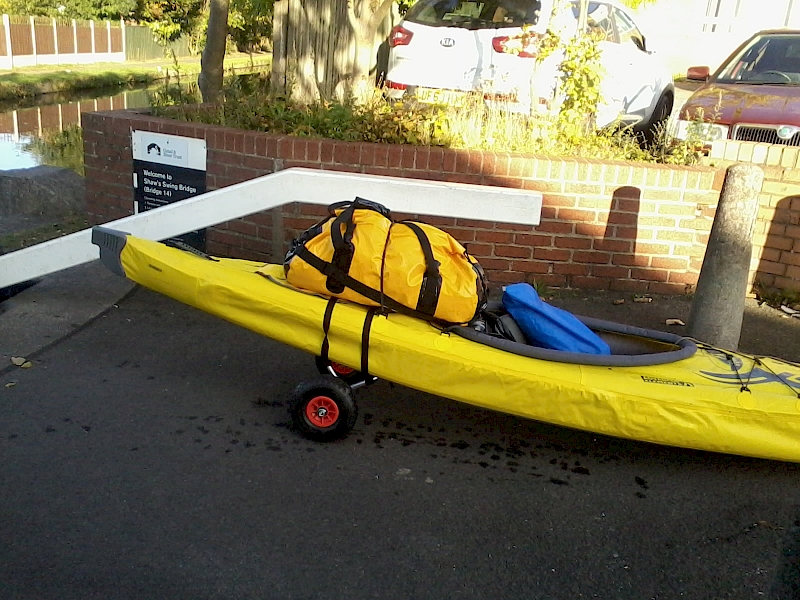 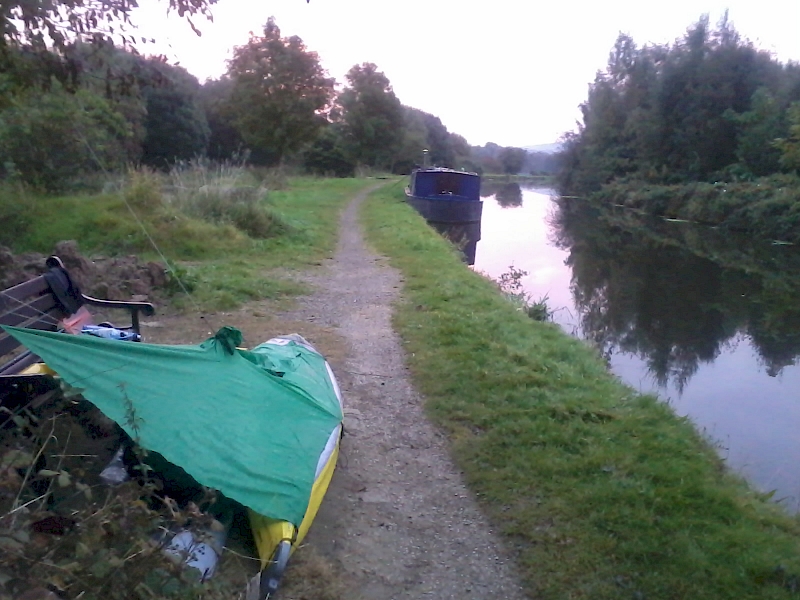