DAY 3 - GOING WITH THE NO-FLOW

DAY 3 - GOING WITH THE NO-FLOW 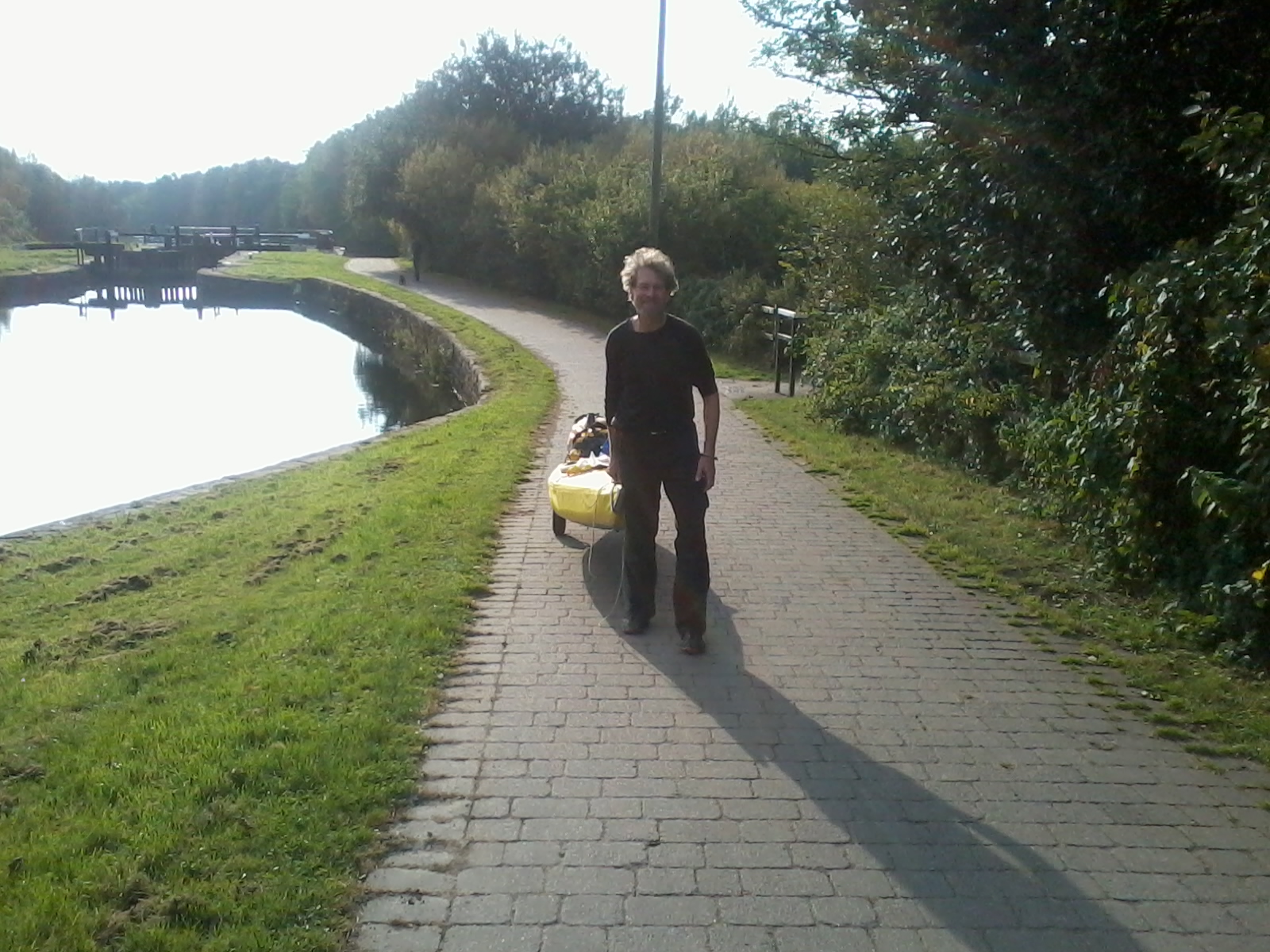 Up at dawn. Tin-can spirits stove on for coffee whilst I packed up. When I was sea-kayaking around Ireland a perfect start to the day was getting time, tide, wind, current and coffee in perfect synchronicity. Didn't happen very often but when it did I'd sit in my kayak - also bright yellow - and get whisked along by wind and water whilst sipping hot coffee, watching the coast go by without having to do a (paddle-) stroke of work. Canals are different. Long trails of flat still water. No current. Every yard of progress means a paddle stroke. Stop paddling and I stop moving...or, with the constant head wind or head breeze, go back. I'm keeping up a steady stroke - 3 to 4 miles an hour is the kayak's optimum speed for efficiency, and that's fine.

Another thing about these artificial ribbons of water twisting and rolling out across the country. They are ribbons - long and narrow. Corridors between high banks and trees and hillsides and town walls and factory sides. Long views ahead, close-up to left and right. I like this. It's like switching between a telescope and a magnifying glass. A raven up and far ahead. A kingfisher - malachite green in a sun ray, rather than the usual grey-day azure - a few feet to my left.

I paddle into Wigan. Past Wigan Pier. It looks a bit bleak along the towpath. Graffiti, broken glass, old industry, new unit businesses, razor wire. The canal hours around the edge of the town and there are 21 locks up a two mile climb. I'll be pulling the kayak on its trolley up the tow path the whole way. This starts as badly as I fear - not because of the catcalls from bored teenagers hanging out by the canal but because of the barriers to stop cars and motorbikes. There are shaped gaps for walkers and cyclists, but none for kayaks. I have to lift the kayak, trailer and kit over three gates in a couple of hundred yards. My muttered curses become the most antisocial thing along the whole Wigan stretch of canal. But things improve. My fellow towpath-ers are mothers walking schoolchildren home, fishermen, walkers, commuting cyclists, an elderly man who tells me he's had a right good day contemplating the canal but now he's off home for his tea. I meet Steve Rennie who's spending a year on long walks, and he takes pictures of me doing my barge-horse act towing the kayak up the 300 feet of climb.

I'm rewarded by the Kirkless Hall Inn by the top lock (actually one before - I nearly launched the kayak for what would have been a twenty yard paddle to the actual top kick and another pull out). A pint, pie and chips - the first food and drink since coffee and a few dates at dawn, ten hours before. The kayak was admired by Liam and Anthony, two locals who were mountain biking a circuit of peaks - today's climb has started my rise up into the Pennines and towpaths.

It was nearly dusk when I relaunched. Over the next few miles I was looking for a place to pull out and bivi next to the kayak. Somewhere I wouldn't bother anyone, and no-one would bother me. The canal was contour hugging now so steep banks on the uphill side and sharp drops to valleys below on the downhill side, and a towpath too narrow to camp on. But on prospecting hop out of the kayak gave me a ringside seat as two kingfishers danced and displayed only a few yards away in the last light.

I continued by moonlight. Ahead the distant glow of some large industry. The muted roar of the M61 over the hill. But close-up it was darkness and peace as I pulled out by bridge 66 and set up camp and boiled up a mug of soup. The temperature dropped. A clear cold autumn night. Two little owls argued in the trees on the opposite bank. And despite the chill there were bats. 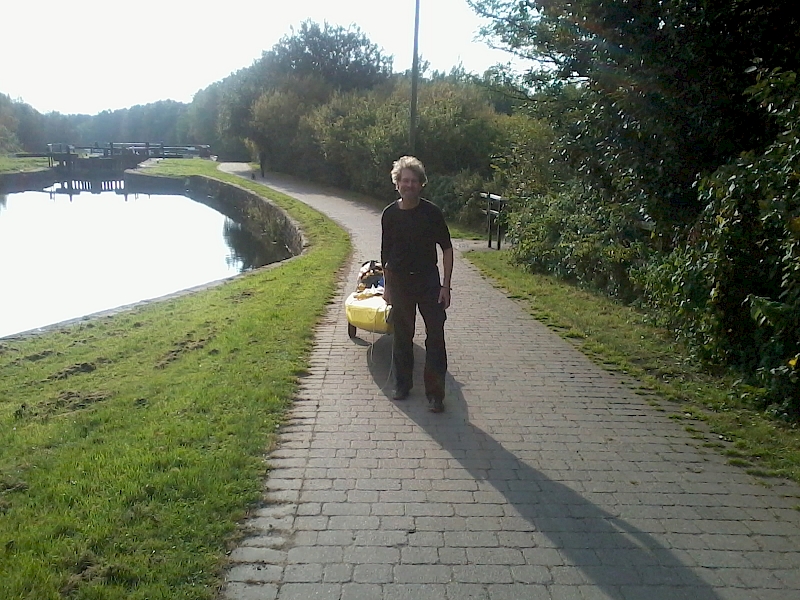 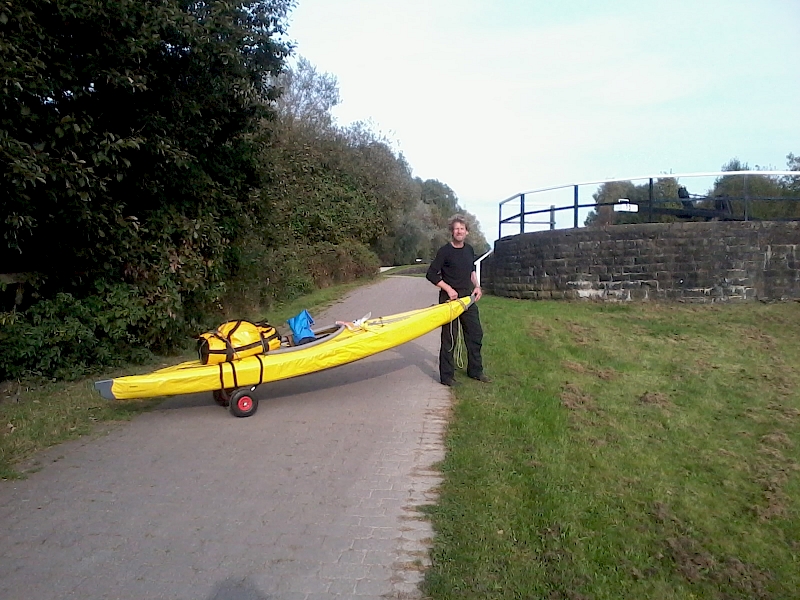 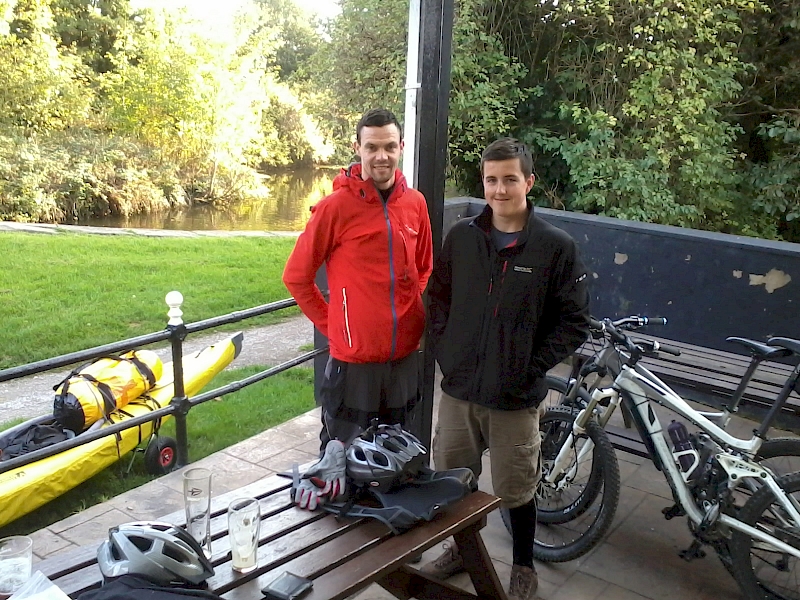