DAY 1 - THE LEAVING OF LIVERPOOL

Home - The Route - DAY 1 - THE LEAVING OF LIVERPOOL

DAY 1 - THE LEAVING OF LIVERPOOL 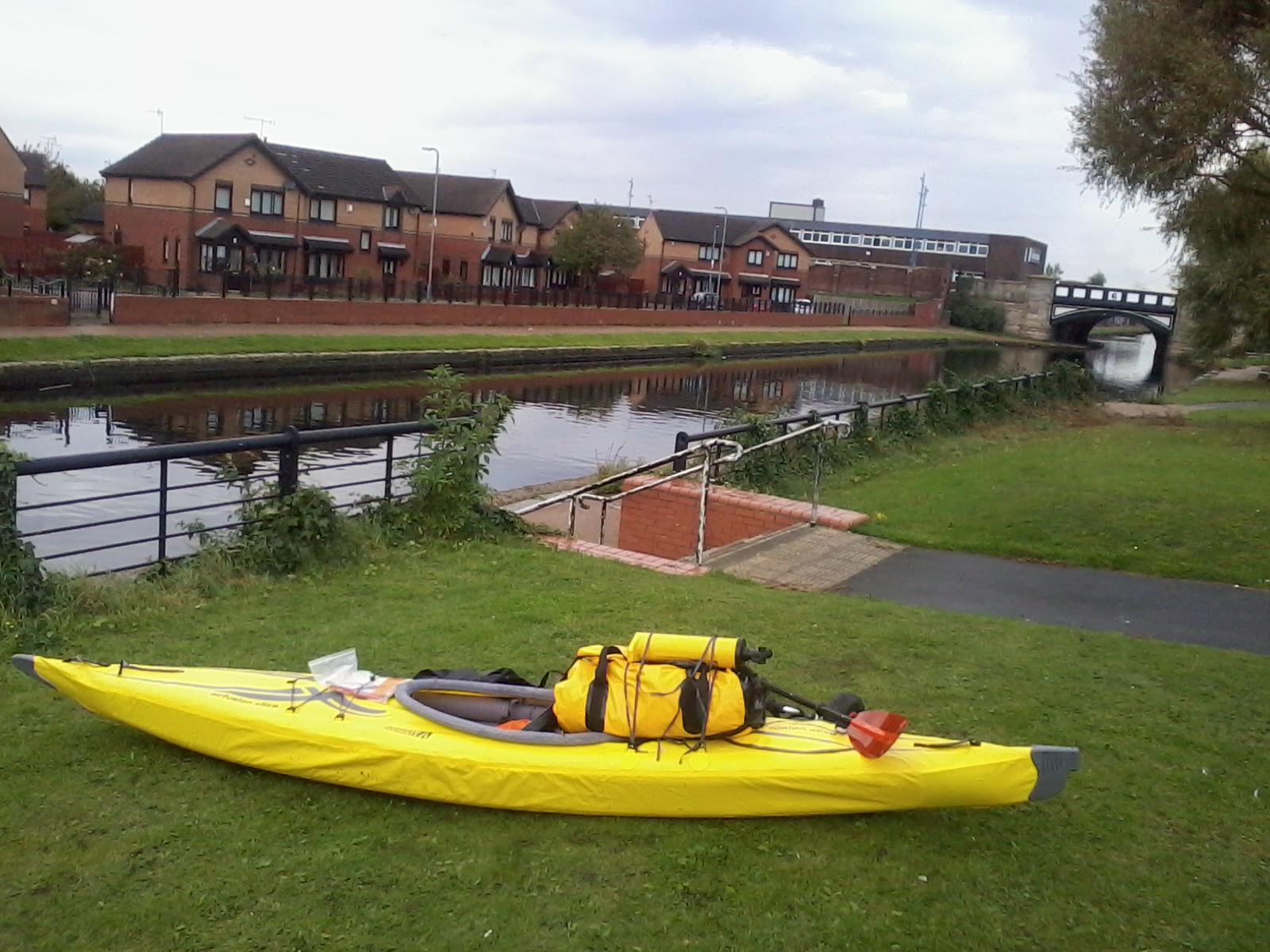 The plan was to be on the water at the start of the Leeds and Liverpool canal by 14.00. It seemed smart to have plenty of time to cover the ten plus miles to get beyond the city and into the country before dark. It's the biggest disadvantage of slow adventuring in autumn and winter - the short days and long nights.

At half two I was waiting for a bus out to Canal Side Park (encouraging name), just a lock or two away from the Mersey and the sea. At three I was still waiting. I got to the park a bit before four. Twenty minutes later the kayak was assembled, launched and - tricky - packed. Basic bivi kit, a few clothes, food, pump, wheels and the rest add up and being part-inflatable the kayak is limited in storage space inside - but tie-down points on the back deck took a waterproof kit bag and the wheels neatly straddled the bag.

I don't know exactly what I was expecting from canal side Liverpool, but to be honest I was a bit pessimistic. Well, it wasn't all lovely but the water was clean, people called out greetings from the towpath or wanted to talk about the trip and the kayak. I saw kingfishers, moorhens, herons. Old factories. New houses. A bit of graffiti. Walkers with dogs. Cycle commuters.

Dusk fell, then dark. The night sky reflected in the canal waters. Bridges. A number of swing bridges, which I was able to limbo dance under in the kayak, saving time and hassle.

Beyond Aintree racecourse I stopped for the night. A wooded slope above a grass bank on opposite side of canal to towpath. I carried the kayak and kit into the trees. Where I discovered I'd forgotten my bivi bag. Not really serious but will put pressure on my bushcraft skills. Used kayak turned upside down as 'wall' and suspended pocho over it as shelter. Sleeping bag laid out, tin can stove lit. Lying out under moonlight as I boiled water for coffee. Pure pleasure.

Whilst drinking hot coffee in the darkness, a powerful flashing torch lit up the progress of two poachers with hand nets, working their way doing the canal bank. They didn't see my low-tech camp. For which I'm glad - I don't know what the etiquette is when a trespassing wild camper meets two desperado poachers.

And so to asleep. Barely ten miles under my keel, but a great start to the full 160 miles to come. 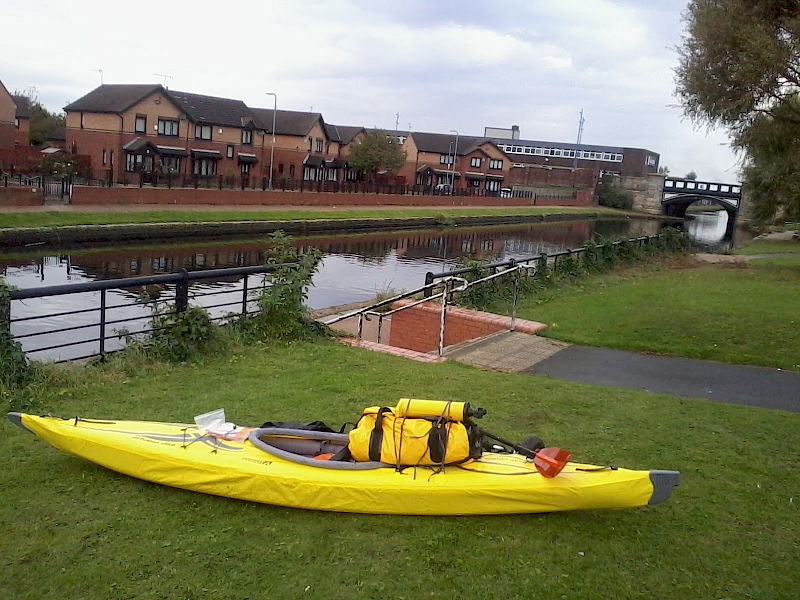 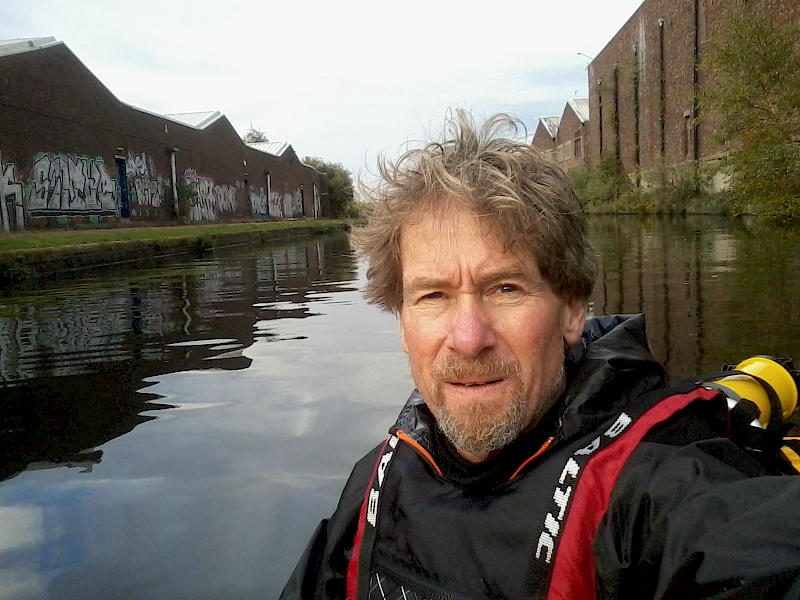 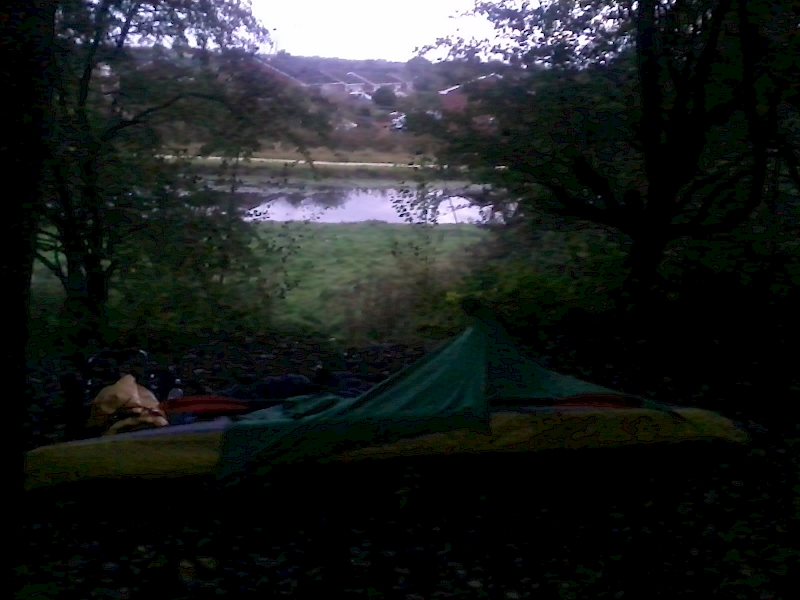