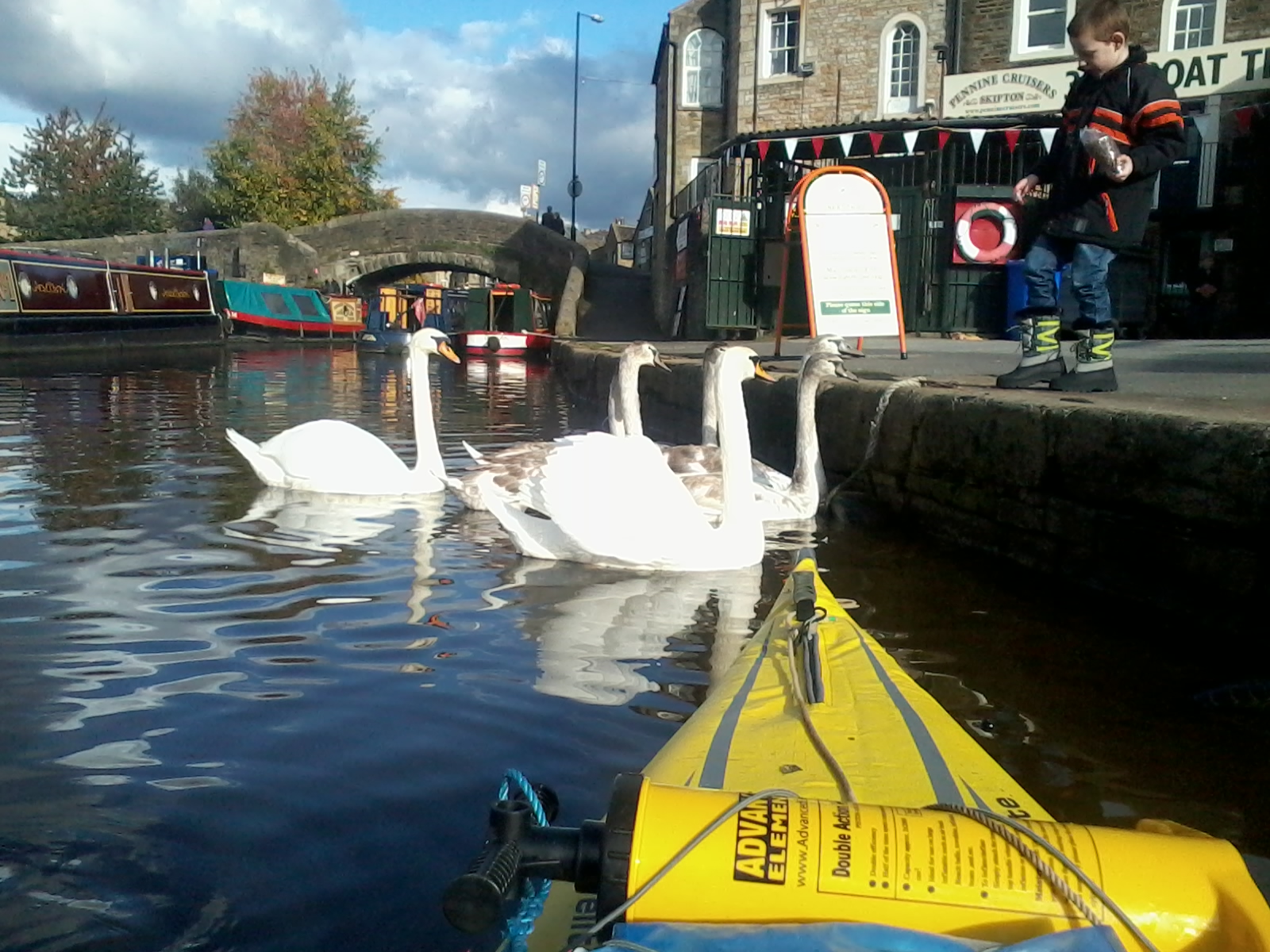 It's always hard to get back into expedition mind frame after a break. I was in Skipton early in the morning but then got sidetracked. A long breakfast in Coopers. An hour or two of writing up notes. Then around lunchtime, when I was absolutely ready to leave and on my way to pick up the kayak from Pennine Cruisers who'd been stabling it for the past couple of days, I saw the Sound Bar.

Lockkeepers and other canal folk tend to be into their music it seems, and I'd had recommendations to visit the Sound Bar from twenty miles before I'd arrived in Skipton. In Majorca I'd once found a shop-bar called Shoes and Wine. Not my thing, but I could see the genius of the pairing. Drop in for shoes and you could have a tinto or two to help the decision making, or call by for a glass or two of wine and come out with some shoes; (the latter was what the person I was travelling with did. As I said, pure genius). Well, so is the Sound Bar. A proper counter bar at the end with real ales, and tens of record boxes to sort through; they'll put on a favourite album whilst you're having a drink. But their own choice of music is probably better than mine. Nothing to put one back on the water like a lunchtime pint and a dose of Led Zeppelin.

Assembling the kayak always draws onlookers. It's a bit like a magic trick. That small bag becomes that full-sized kayak? I could tour the canals doing street or rather towpath performances with it. Now it's a bag, now it's a kayak. Having such a unique talking point as my craft has fulfilled a secondary and more important function. As writer in residence to the Canal And River Trust and with a book to research meeting people and hearing their canal experiences is key; the kayak often gets an conversation going. The sun was out. The waters sparkling. My luck like the weather seems to be - mostly - holding. The few days and nights when it has rained, and for one twenty four-hour period poured and gusted non-stop, merely makes me grateful for the sunny days, the cold clear skies and the light breezes.

Leaving in the early afternoon is not a disaster. Ahead of me is ten or so miles of countryside and villages but then the final twenty plus miles into Leeds is increasingly built up offering little opportunity to sleep on the towpath. So an easy day today and then a dawn start tomorrow to get to Leeds in one go. With only ten miles to cover i was under no pressure. Though I did manage to get 'lost' within yards of pushing off from the wharf in front of Pennine Cruisers HQ. Setting off up the Springs Branch (which I'd have found dead-ended within a quarter of a mile) before realising from the alignment of sun and stars, the pull of magnetic forces sensed by my old sea dog experience, the feel of the waters beneath my keel, but mainly from someone shouting 'you're going the wrong way if you're heading to Leeds, or going anywhere.' Normally on canals there are only two ways to go - the right direction or the wrong direction, depending on where you're trying to get to.

An afternoon of what I think of as 'paddle strolling.' You can't drift on a canal, what with no current, but one can paddle lazily. That's what I did. Looking into fields, saluting swans. stopping off to look at Ben Cumming's shed-piano-bath raft, which I'd been told about as far back as Blackburn, and as much piece of performance art as vessel. A raft with a shed and a piano on its deck, and a floating bath behind, there's no engine and he's already worked his way along most of the Leeds and Liverpool pulling it and legging it through the Gannow Tunnel. I'd spoken to Ben on the phone and was sorry to miss him; he had, like me, taken off on a few days's shore leave.

I stopped in the late afternoon in Kildwich. The light and the temperature were dropping. I wheeled the kayak and my kit down the steep village street, past the church and into the beer garden. Inside there was a warm radiator to sit next to (despite waterproof socks my light shoes are perpetually damp), wifi so i could book an AirBnB room in Leeds for the next night (nothing like having a haven to head for and a deadline to meet), and a fabulous signature dish Beef and Blackmills Cheese pie with heavy chips. A bit of conversation at the bar with locals and then just when they thought I was settling in for the evening I disconcerted them by pulling on my kayaking kit and disappearing into the night to continue for another four miles.

It was well past nine when I launched and pushed off. Less light from the moon, but still the silver path of reflected sky in the water that gave just enough illumination to see any flotsam, or sleeping swans. In the dark proportion and perspective start distorting. Sometimes the banks seemed to loom high on either side. Boats moored along the bank take on the bulk of ocean liners. I found myself paddling towards what I thought was the way ahead to find it was a trick of the shadows and I was heading in towards the trees. At one point I heard a surging gurgling behind me. Turning I saw a male swan, ghostly in the gloom, swimming hard at towards the stern of the kayak. Though when I stopped he stopped. Then when I continued he 'chased' after me. Another swan I passed was more direct in his territorial behaviour. Long after I'd passed him I heard a whooshing and whistling and beating sound behind me, and a sudden splashing. He'd taken to the air to demonstrate his virility and ability to see off huge yellow interlopers. I stopped under a tree by one of those handy abandoned bridges that cross from one field to another and provide a shelter from the wind. The breeze was gusting through the wood on the far bank, as I threw down my bivi bag (offering thanks to Mark who'd sent it up to Skipton), pushed my sleeping bag inside it, set my alarm for 5.30 and fell asleep. 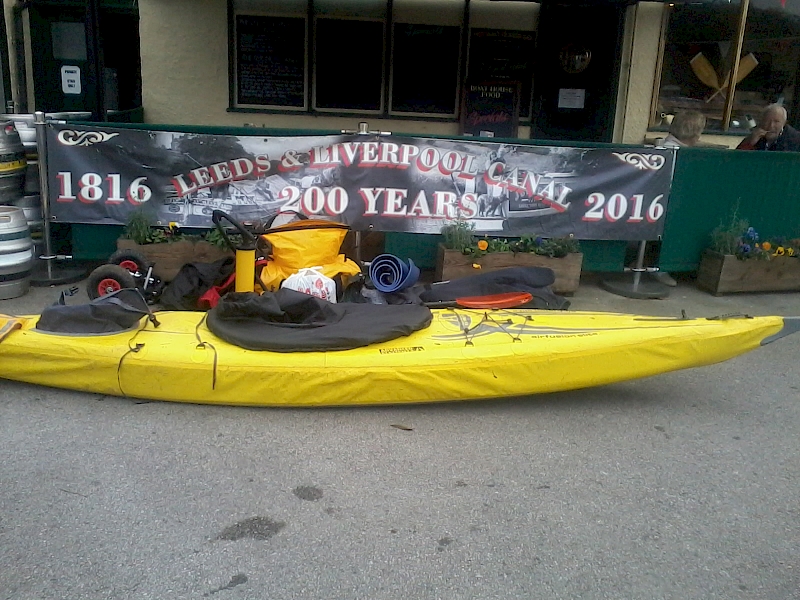 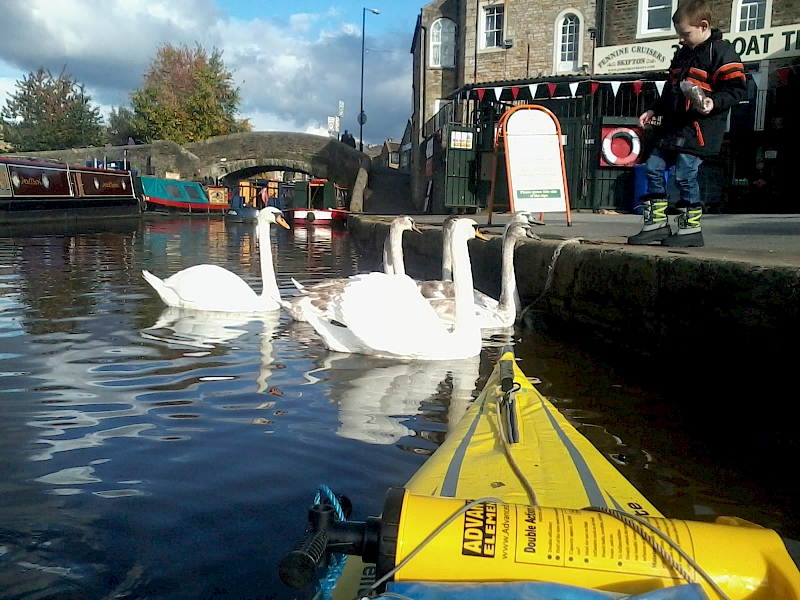 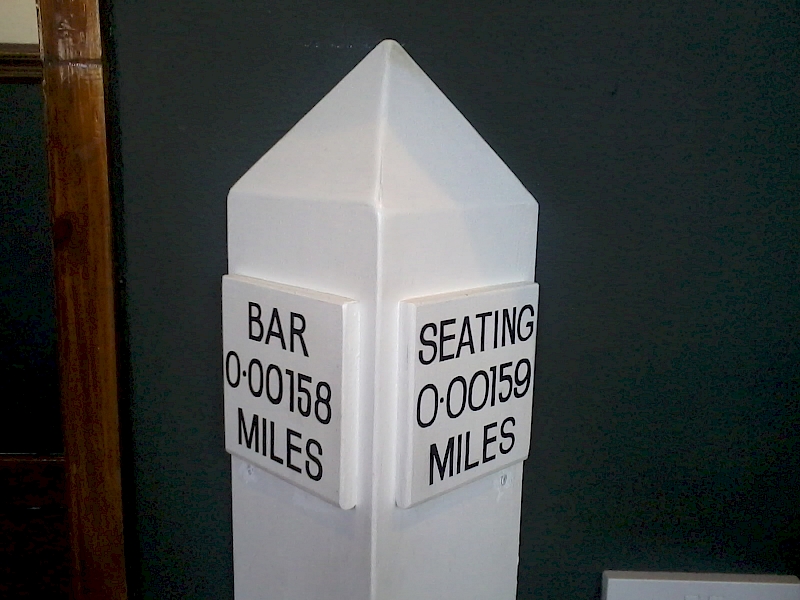