DAY 12 - INTO THE HEART OF DARKNESS

DAY 12 - INTO THE HEART OF DARKNESS 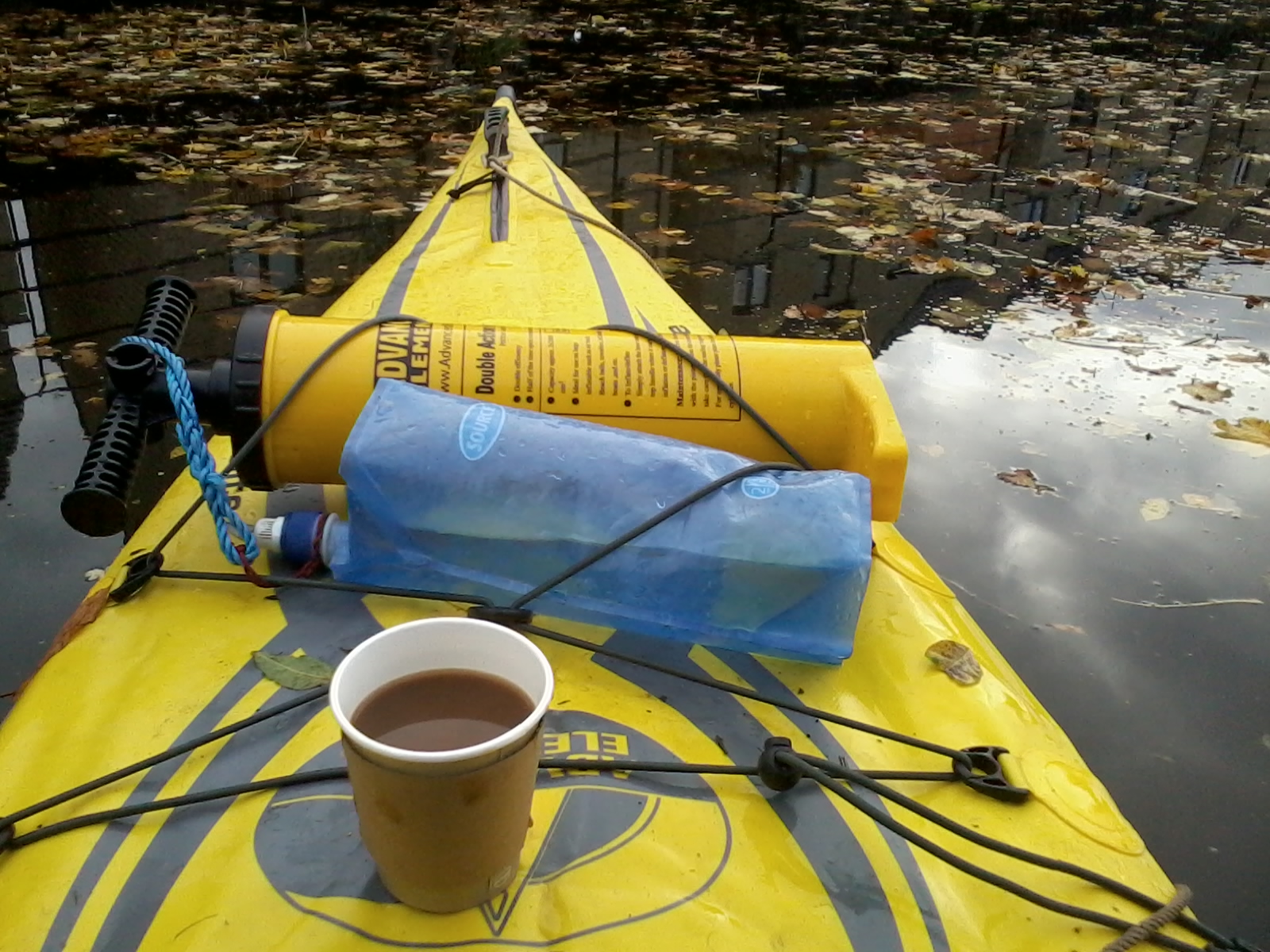 The alarm went off at 5.30. It was cold and clear outside by sleeping bag. And dark. I reckoned I'd been a bit austere with my six-on-the-water start but I did need to get to Leeds this night. I gave myself a five minute lie-in. And woke at half six. It was just breaking dawn as I packed and launched.

Be bold, start cold, is the runner's adage. I did the same and within a mile I was warm. I had around 22 miles to paddle. In theory there was plenty of time but I'd been getting unsettling warnings about the last few miles into Leeds. One of the guide books referred to it as 'bandit country,' more measured advice was that bored youths at the final locks had been making life unpleasant for boaters and the secret was to start early and get through to the centre of Leeds by early afternoon, and not to stop. As someone who has to stop and pull out at every lock, I could only take the start early advice. And now I was blowing that. Especially as there was an easterly head wind blowing up. Can't say that I was too bothered by any of this, though. My experience of life is that warnings about 'the tribe over the hill' are usually the prejudice of the tribe on this side of the hill. Or one or two incidents conflated into 'there be dragons.' Then again my experience of the outer estates of northern cities isn't exhaustive.

I was sharing the dawn and the sun rise with a trilling of bird song, joggers, a single fisherman, and another paddler. Coming around a corner iImet a very rough mirror image of myself. Inflatable/folding kayak, bearded bloke, time-honed paddle technique. There the resemblance stopped. Coot's craft was blue, and he was a dapper dresser compared to my sleeping-out rugged look. An artist and designer, "...a few album covers back in punk days, things like that...." he regularly commute-paddled four and a bit miles up from Saltaire. "I don't know why more people don't do it."

Mention of Saltaire was the first blot on my day. I was going to be too pushed for time to stop. And I'd been particularly recommended the David Hockney exhibition in the gallery. I'd rather fancied combining a bit of culture with slow adventuring, and tying up my kayak and sauntering ashore as if stepping off a gondola in Venice.

There was the great industrial art work of The Bingley Five Rise Lock to appreciate though. And even better a full-breakfast at the cafe at the top of the locks, which was opening just as I pulled out the kayak. I wolfed down the calories and trundled the kayak down the towpath -more like the Cresta Run - that ran down beside the steepest lock staircase on the system (am I right? I pretty sure I am. It wasn't worth relaunching for the Three Rise Lock a quarter of a mile further on and so I joined the pram pushers, cyclists and dog walkers on the busy track.

I almost argued myself into stopping in Saltaire despite the time pressure. The sun was out, the leaves green and the huge, refurbished buildings and walkways and bridges were neither Venice nor punting in Oxford but entirely themselves. I still felt that pressure though - get into Leeds early!

The head wind was only light and I'd got into a steady paddling rhythm. The thing about the canal system as machinery is that everything is measured and measurable, and so I was able to time myself between mile and half mile markers and keep under twenty minute miles. Or would have done if it hadn't been for infamous swing bridges that were like a kind of Yorkshire Roulette. I could see them marked on the map but until I got to them didn't know if there was enough headroom to fit myself under still in the kayak, if I'd have to get out and take the bag of the back and push the empty kayak under, or if I'd have to take kayak and all out and walk it over to the far side. I was just approaching one of the lowest I'd yet come across - a light foot bridge with its underside almost touching the water - when a woman came over from a moored boat and opened it so I could tow the kayak through. Mariella, from the Netherlands, and her partner had just had their two good bicycles stolen the night before. "Three lads...people saw them sitting and waiting....but they didn't know what they were doing....then across the bridge, through the gate - how? it's locked - and they had cable cutters, they cut the bikes and then gone!" She was still angry and upset. The feeling of being targeted was frightening too, I suspect. I began to take the warnings of the lock banditry ahead seriously again.

Pushed for time but hungry after five hours paddling I pulled into Apperley Bridge Marina which had a canoe bay. The luxury of tying up safely, having a chat with managers Rob and Vicky in the cafe and paddling on with a take-away coffee balanced on the deck.

I was swinging between hard paddling and a more leisurely pace. Overall it seemed too good a day to just rush, and the tranquility of the countryside was calming my paranoia. As were the numbers of people cycling, jogging, strolling and generally enjoying the towpath in very un-bandit ways. Pulling out to pass Newlay Three Rise and Forge Three Rise locks I met Seasonal Lock Keepers AJ and Steve. Both were keen to put things into perspective. There had been some antisocial behaviour at some of the locks near Leeds, but they were angry at the 'Bandit Country' label, and wanted me to know how things had improved greatly since the towpath had been paved and the Canal And River Trust had tidied up and mediated the area. The cyclists, joggers, strollers and anglers I had seen were all signs of a shifting demographic. Apparently just making the towpath a nicer place to be made it a nicer place to be.

Equally with dusk only an hour or so away I was still under pressure to get to Leeds before dark. I'd booked an AirBnB room not too far from the canal on the western side of the city. I'd considered just pulling out and trailering the kayak up to the house in the estate so as to be ready to roll back to the canal the following day and continue. But that did seem a bit ill-advised. Steve's local knowledge suggested that I pull out by the old brewery that had been transformed into student accommodation. "That canoe folds up, does it? Well, then probably good to take a taxi where you're going.'

And so it was after twenty odd miles, as dusk fell, I found myself on the towpath racing to fold up and pack the kayak. With a new record of under fifteen minutes for the whole process, I was standing with my two large bags wondering where to head for a taxi, when two women passed along the path. Up to the Kirkstall Bridge Inn, they reckoned. Then as we got talking about the kayak and my trip it turned out that Linsey Jones was an actor who'd performed in two canal-themed shows, Multi-storey Waters and Seven Bridges, both by Stephen Bottoms. Everyone, it seems, has some connection to the canals.

An hour later the kayak and I were inside a comfortable house. There was a bath running, a mug of tea to hand, and I was contemplating the next day's final miles on the Leeds and Liverpool Canal (length 127 miles) and transfer to the Aire and Calder Navigation to complete the final 40 miles to Goole. 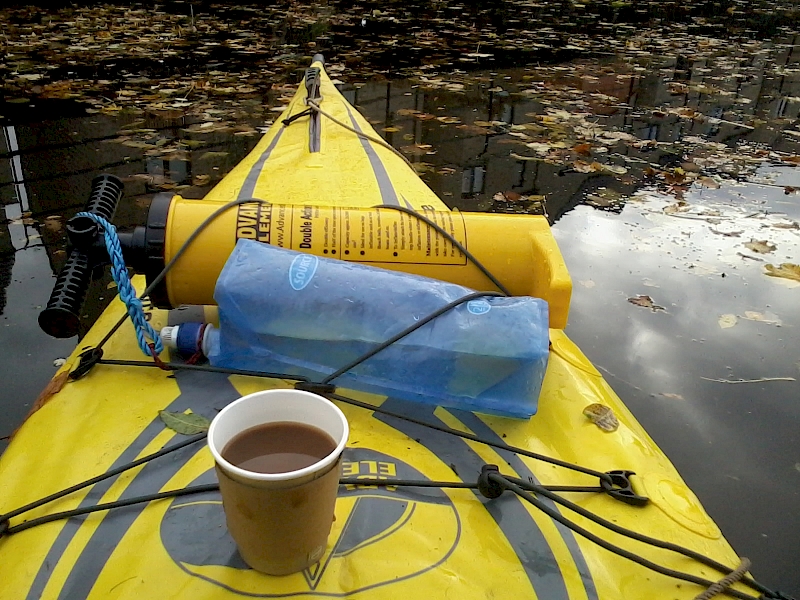 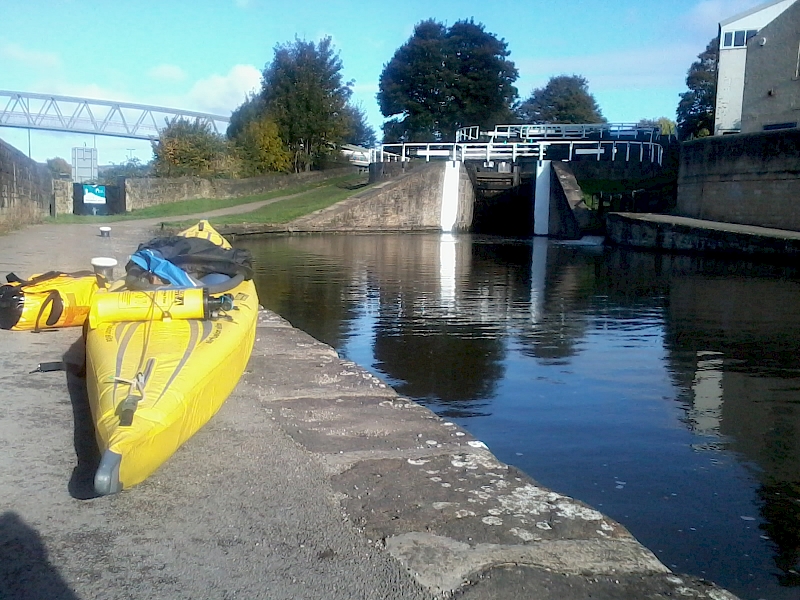 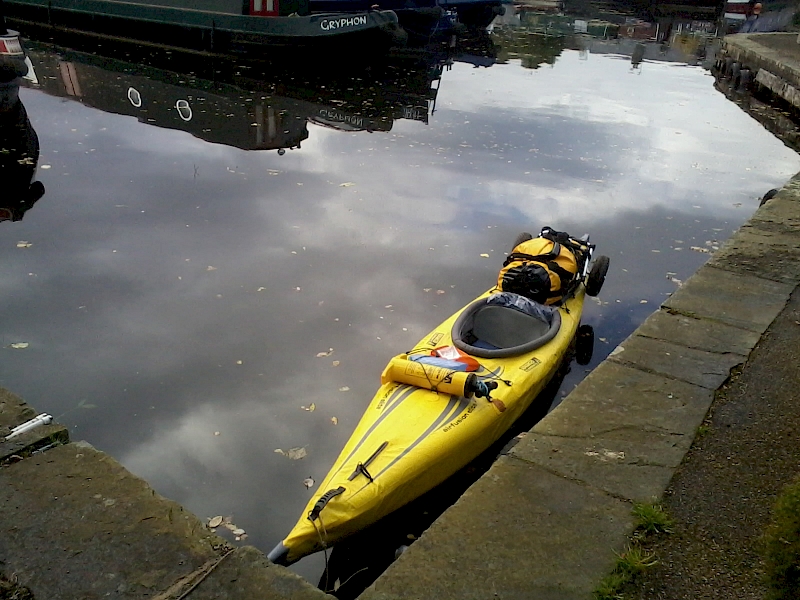 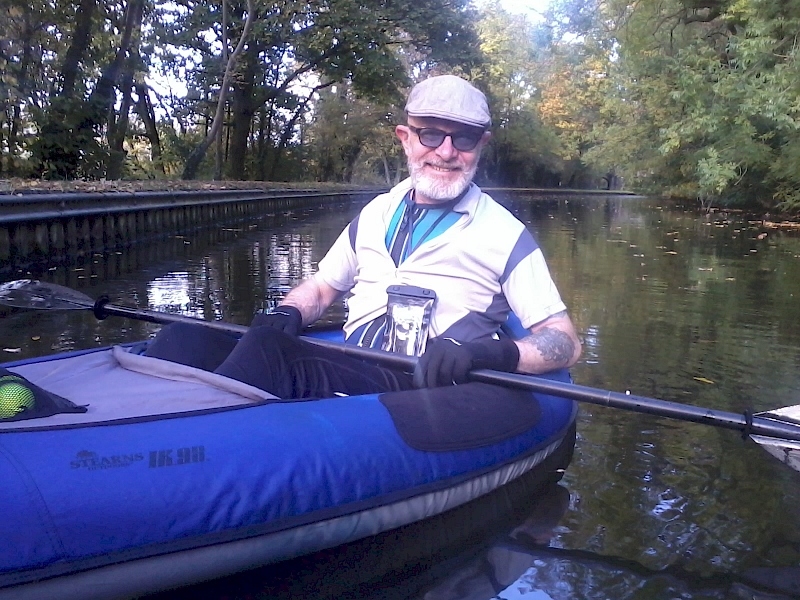