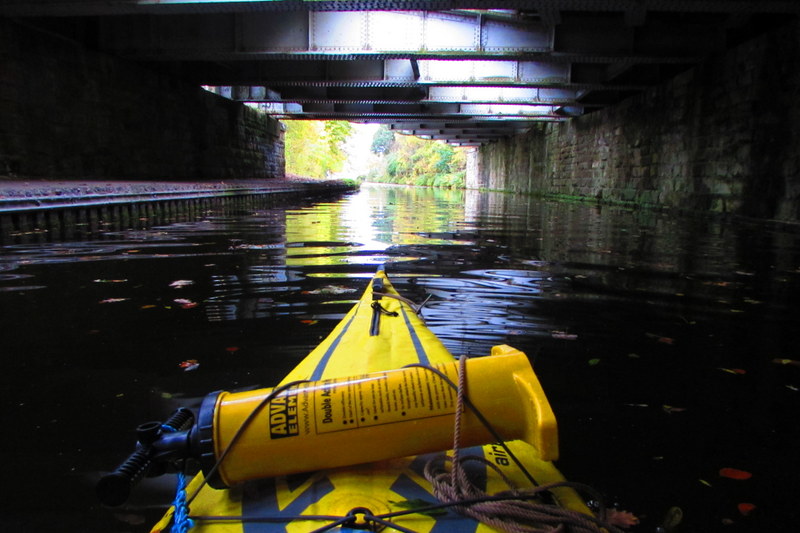 There were numerous reasons why I left Leeds late in the afternoon, rather than late in the morning as planned. Waking in a warm bed. A bathroom with hot water. The Enzo café just down the road from my AirBnB stay. Talking with my hostess, Lisa. And also finding that my trolley had a puncture, making my mile long walk back to the canal slow.

With the kayak assembled and inflated – that didn’t take long – I set off from under the brewery where I’d stopped the night before. It was still an edge land, the waters bounded by wasteland, trees, and houses behind high fences, abandoned yards, and thriving businesses. There were cyclists, dog walkers and anglers showing how the canal had become a busy leisure land. One youth spinning past on a BMX did veer towards me to sing ‘Row, row, row your boat…’ and ending his verse in an obscene suggestion as to where I could row to, but I took it as cheerful, and remarkably tuneful banter.

I pulled out to pass another six locks. And lost more time chatting to people interested in where I’d come from. ‘Liverpool?’ repeated one bloke struggling with the concept, ‘Today?.’

There were live aboard boats moored up on the off side bank. One covered from end to end in a knitted ‘skin’ portraying cheerful maritime scenes including mermaid figures, sea shells and fish.

I’d mentally relaxed my guard. Coming into the last mile of the Leeds and Liverpool Canal it felt as if, with 127 miles behind me and a mere thirty miles almost dead-straight down the Aire and Calder Navigation to go, I was almost at the end of the coast to coast. I hadn’t done my research. ‘Navigation’ meant a canalised river, and the A&C was a big, still working, waterway leading to the coast and joining the sea to industries, past and present to the sea.

Granary Wharf by Number 1 Lock (though the last on the L&L Canal for me had been developed around the wharfs, locks and channels where the two waterways met. I pulled out, trundled the kayak across plazas, past restaurants and cafes, and through throngs of home bound city workers (Home bound? It was that late. I got to a narrow, airy bridge spanning Number 1 Lock and looked down – very far down – into the dark waters of the Aire and Calder. Great walled canyons ran between the soaring buildings on all sides. One branch disappeared under the station as a black tunnel. The navigation itself ran eastwards between high walls. There was no place anywhere to put the kayak in. I was bamboozled. And apprehensive. With dusk falling I considered my options. One, quite seriously, was to give up, announcing an honourable success in covering the length of the Leeds and Liverpool and my crossing the Pennines. Another was to keep pulling the kayak on its limping trolley down however many streets and through however many housing estates and industrial areas needed to find a possible access to the water. Then I saw a narrow gap in the wall with steps leading down to a point a mere five or so feet above the water. A water taxi pick up point. I gave it a go. Lowering the empty kayak down, nose first on its mooring rope, and then letting myself down to stand precariously in the cockpit, keeping balance with one hand in a crack between the massive stone blocks whilst I manoeuvred the heavy bag, then the trailer and then all the smaller bits of kit into place and lashed them on. I realised that if I overbalanced there was absolutely no where I could climb out again and it would be a bit of mess. Things didn’t seem a lot better when I was sitting in the kayak safely, paddle in hand and set off. The walls either side of the water towered above me.

But it was wonderful too. I paddled downstream through the city. People drank and ate on balconies on buildings high above me. I passed under huge bridges. Wharfs soared into the air, sized for big boats and big cargoes.

I’d only just got comfortable with these huge dimensions, compared to the small boat size of the Leeds and Liverpool Canal when I reached the first lock. More feats of balance and pull-ups to get myself up onto the side, and pull all the gear up and then lift the kayak clear. (My big concern now was not damaging the skin or the frame of the kayak with these difficult haul-outs). Another dispiriting trundle past the immense lock on the flat-tyre trolley. Another heart sinking moment when I saw how big the drop was at the far end to get everything back into the water. If this was how the coming locks and the whole A&C Navigation was going to be then I couldn’t see myself sensibly continuing.

There was some hope now. The city dropped away into big industry after this lock. There were a few narrowboats moored along a quay – they were dwarfed by the scale of their surroundings but I reasoned that if they could operate, and moor and land crew safely then so, surely, could I.

It was almost dark now and the river had widened out. Rather than the usual canal navigation choice between going the ‘right’ way and the ‘wrong’ way there were now dark waters leading off in all directions. Banks of lights were massive flood defences were being built in some quarters, and dark docks and harbours of oily waters in others. Wide channels leading off into the dark. A bit of serious navigation was needed. A push-tug and a barge of waste passed to one side, far across the waters. Then another lock. Equally huge, or perhaps a bit smaller. Or I was I just getting used to the demanding pull outs and get ins?

Then quite suddenly, after I’d relaunched, the urban and the industrial dropped away behind me and I was on a wide river with steep overgrown banks. It was like being on the Rhone or one of Spain’s big wilderness waterways – all places I’d paddled in the past, and under somewhat similar conditions.

I was feeling relaxed again. Though unsure where I could pull out to sleep. There was a rowing club with a huge window with running and rowing machines facing the river and a Sea Scout club with uniformed lads drilling and marching, adding to the impression of a busy and happy waterway. I passed a homily row of live-aboard boats moored against a long staith. Their curtained portholes and windows glowed with light as slipped past. I considered pulling out and sleeping next to one of them but kept going, under a footbridge arching high above me. I was on the canalised section of the A&C and the river ran parallel to the north leaving a thin, tree-ed ribbon of land between the two waters. There were abandoned, derelict, overgrown quays along the bank – just a concrete edge and few bollards amongst the willows and nettles. A lone narrowboat moored at one point. A few hundred yards further along I pulled out and set up camp on a patch of grass trampled flat by anglers under the trees. Bivi bag down beside the kayak, spirit stove lit to heat up supper, a quarter bottle of wine opened to sip as I ate, wrapped in my Alpkit down quilt against the dropping temperature. Then sleep. 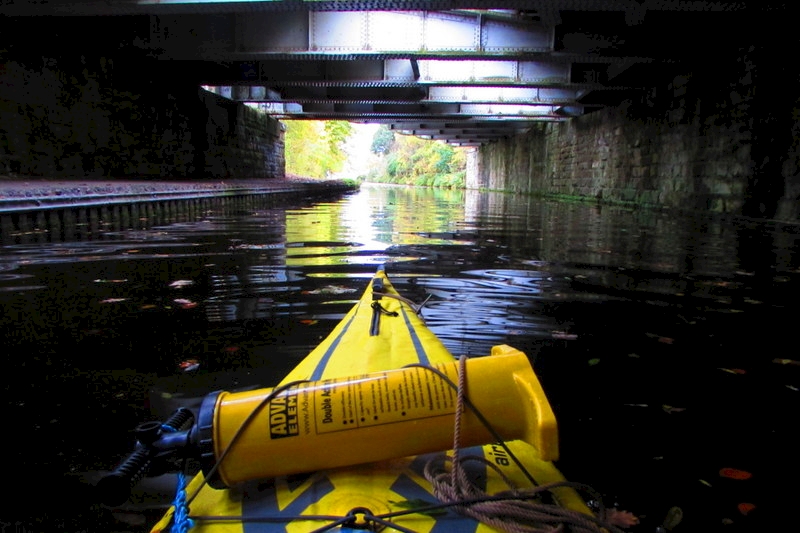 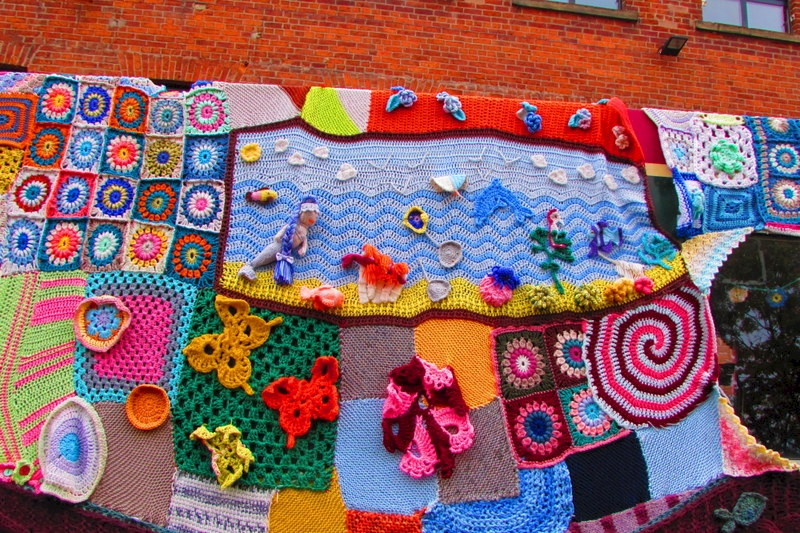 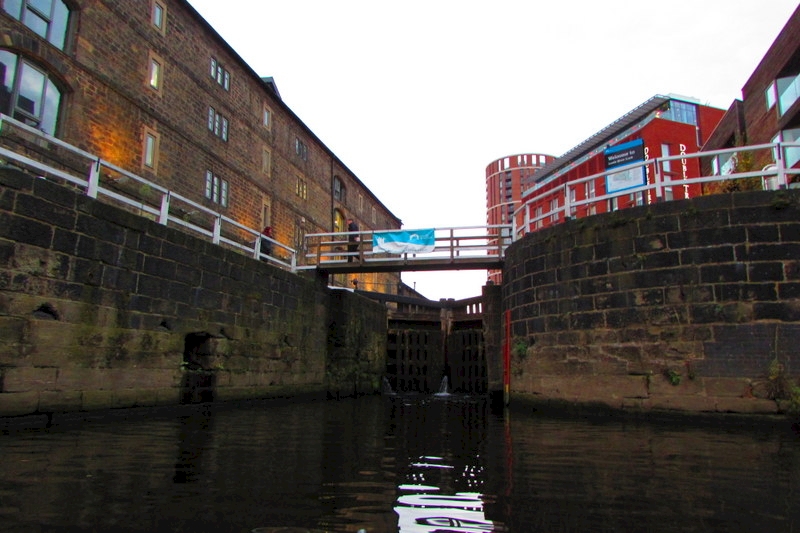 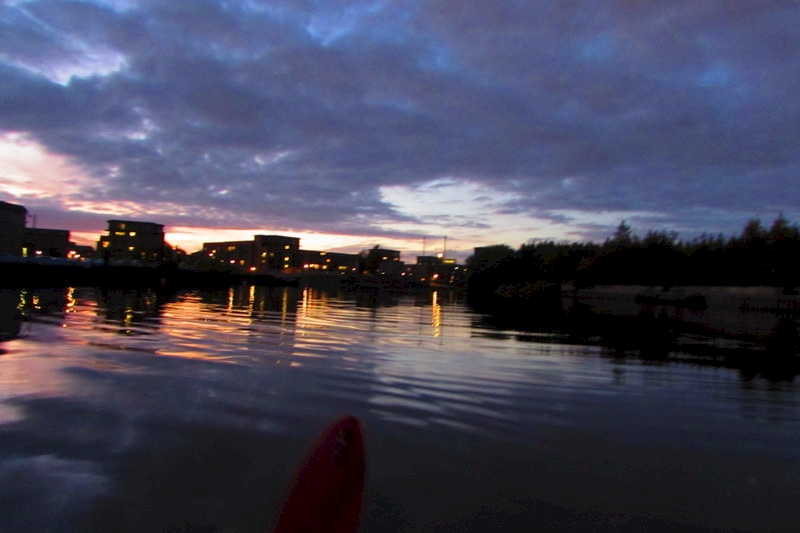 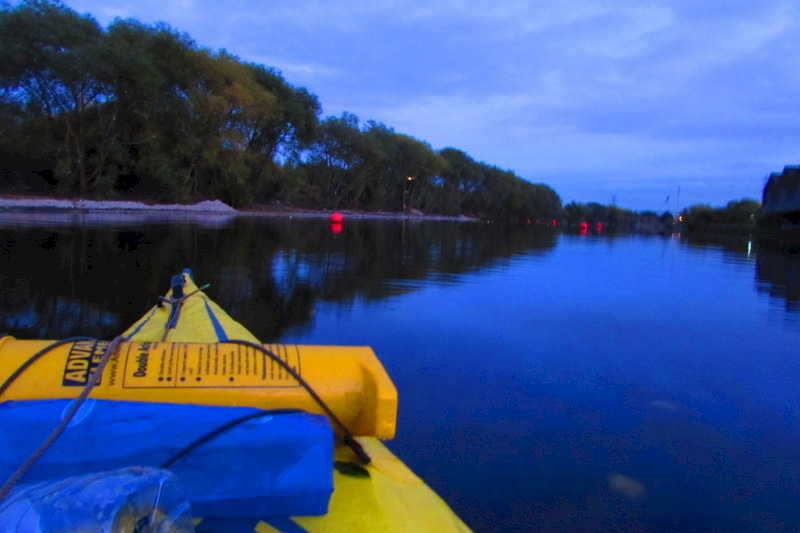