DAY 14 - A PADDLE THROUGH PARADISE

DAY 14 - A PADDLE THROUGH PARADISE 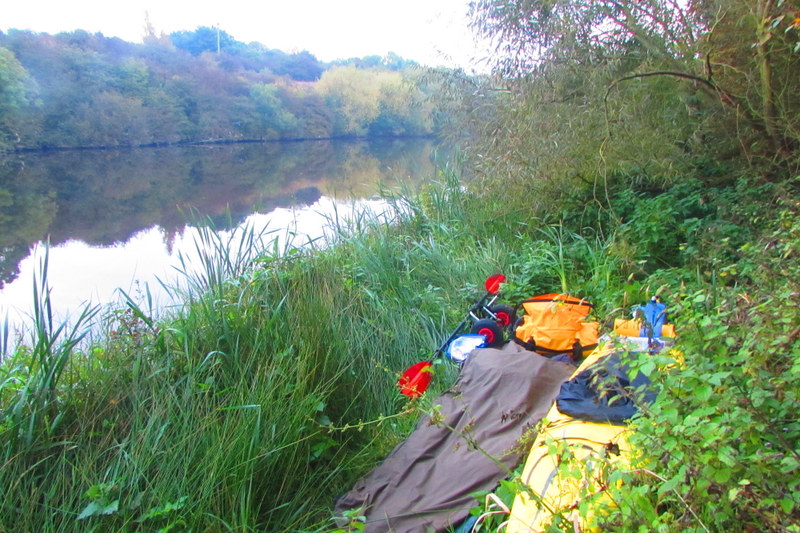 I woke on and off through the night as distant machinery across the waters pounded and whirred, not in a disturbing way but as in the whooshing of distant traffic on the M1 which I could also hear as it crossed the Navigation on a bridge a mile or so downstream. I woke fully to find the waters shrouded in thick fog. It was as atmospheric as an autumnal Seine.

The silence was broken by an even creaking and splashing and the sound of a voice. A rowing eight appeared, all eight women and the cox wearing party hats. By the time I’d made coffee and packed up and was ready to launch the fog was lifting and the rowers, and another eight and several single sculls had passed back down towards the rowing club. I set off in the opposite direction.

The sun was already beginning to burn through the fog and the day was heating up. The kayak was driving along nicely. All was well with the world. I felt a joy to be gliding below the rushing cars and trucks roaring over the huge M1 bridge. Fishpond Lock, though still big seemed a pleasant interlude, and made far easier by the bank on the far side being a grassy slope running down to the water’s edge. A mile later Woodlesford Lock was as easy and pleasant. Lemonroyd Lock, a mile further again has the biggest drop on the Aire and Calder at 13 and a half feet, but still had the mooring places before and after sized to a narrow boat – less than handy for a kayaker but very usable. The punctured trolley wheel was causing concern. It was still usable but not handy.

On these big waters prone to big floods villages, cafes and pubs are set back from the river/canal and though it was tempting to stop and head away from the navigation to find brunch, the morning coffee and muesli (and a tin of mackerel, why not?) were fuel enough to keep going as far as Castleford where I hoped to get a new inner tube for the trolley, lunch and some supplies. I was girding myself for a long walk with the kayak on the disabled trolley, carrying all my bags when I spotted Supreme Marine on the edge of Castleford. I pulled ashore and met brothers Shane and Dave. Of course I could leave the kayak and my bags up on the side of the dock. I set off into town with the wheel in hand. Finding an inner tube was not easy. I tried various in a line of tyre shops, one of whom helpfully popped the tyre off the wheel and pulled out the inner tube – irreparable after my having kept using the trolley to pass all the preceding locks. I tried motor bike shops, found a lawnmower shop that would have been good if it had been open and finally found two mobility shops. In the second one, amongst reclining chairs, Zimmer frames and bedpans an obliging woman furtled around in the back and came back with just the tube size needed.

As I ate a late lunch in the Glass Blower I mulled over how much time on long trips goes not on the walking, paddling or pedalling but on unexpected problem solving – inner tube sourcing, for instance - and resupplying. And how often those random forays into new towns take one to places like mobility shops that one could never in even the most unlikely of scenarios have seen onself visiting in an infinity of lifetimes (obviously in an infinity of alternate lifetimes one would, but I’m making a point here).

Time also goes and much more pleasantly on the random meetings that kayaking – or any other slow travel – produces. Back at Supreme Marine with the afternoon almost gone Dave and Shane offered me a cup of tea. I went into their emporium of masculinity – a building behind the boatyard full of things that went fast, bang or ‘zzzzing.’ There was a full-size pool table, numerous fishing rods, a wide-screen tv with evidence of the last football match enjoyed in the form of pizza boxes, and a squadron of down-hill bikes. The last were serious machines with bomb-proof (though not always crash-proof) frames, heavy shock absorbers and top of the range gear sets. Both brothers were experienced down-hill bikers, and had adrenalin fuelled stories of 50 mph descents off-road down big mountains, and horrifying crashes. Dave pointed out the various breaks his feet, ankles, legs and knees had taken. Then pulled out a case. ‘My friend’s guitar, he’ll kill me if I open it,” he said, opening it to show me. It was hard to leave but the daylight was fading and I’d worked out that I still had an appreciable if very possible distance to go in less than a day and a half, and was becoming too easily distracted.

I didn’t get that much further that night. Bulhome Lock was less than a mile downstream and though the pull out was easy the far side was an awkward descent down steep steps onto a narrow, high jetty. Two Polish fishermen were just packing up. One was taciturn and barely said hello. The other, younger one was talkative. He’d caught three pike in the dark deep waters where the river Aire joined the navigation again and the current moved heavily under trees and steep banks. He measured them out with his hands. Did he eat them, I wondered. He looked at me as if I was a half-wit. No, of course he didn’t – didn’t I know that you could get ready prepared fish cheaply in Aldi? Who’d want to stink up the house gutting fresh fish? He worked in a bakery in Wakefield, he told me, listing the products they made. Breads, cakes, donuts. He patted his impressive belly with a slightly guilty grin.

This river stretch had wild, overgrown, steep banks, with debris high in the trees showing how far flood waters reached. The water had a rich composty riverine smell. There was no obvious place to pull out and camp. I explored a huge harbour dug back into the south bank, its wharfs towering, with rusting ladders and fittings but all the surrounding buildings gone and willows and weeds taking their place. No haven for me.

It was dark when I saw a small flat overgrown area of plant covered dried mud under a steep wooded bank. I made my home for the night on a bed of rushes, mint and nettles; soft, aromatic and stingy if I misplaced a hand or bare foot. The night was warm. There was the very distant sound of traffic and the occasional wail of a police car from over the hills. Distant and then closer gun shots along the far bank suggested poachers. In the time it took to cook up a pot of rice and tinned fish the temperature had dropped to an autumn chill. 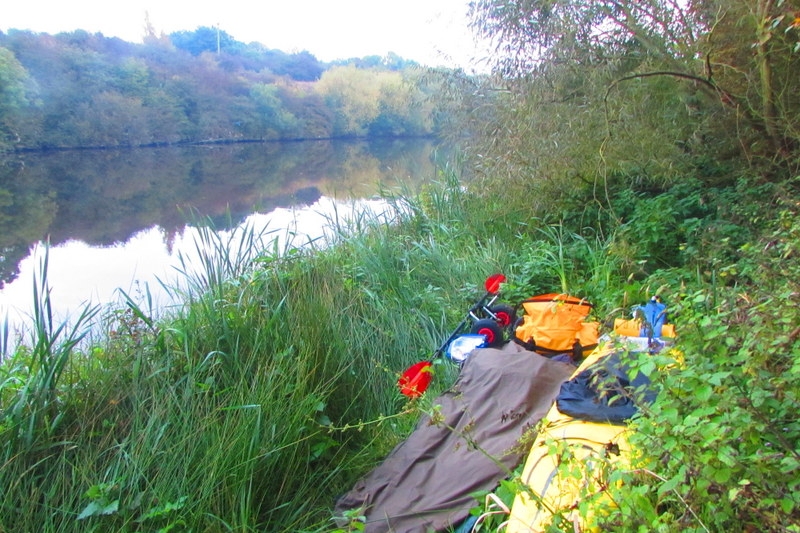 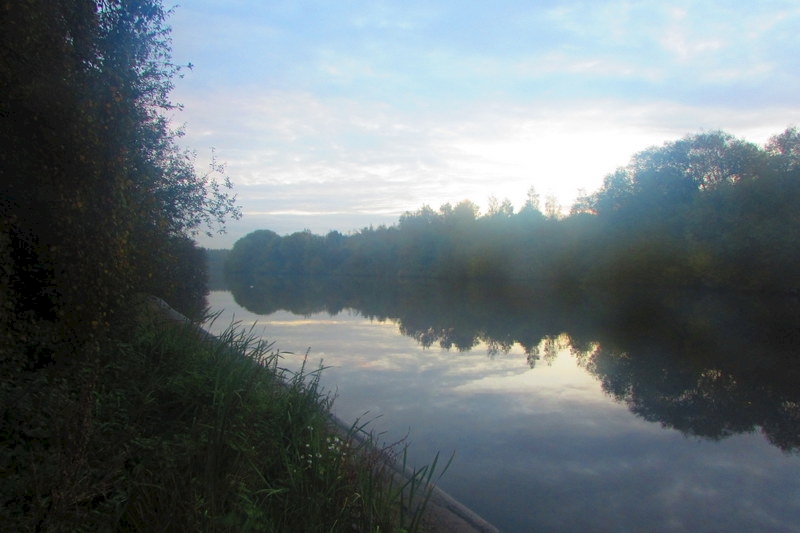