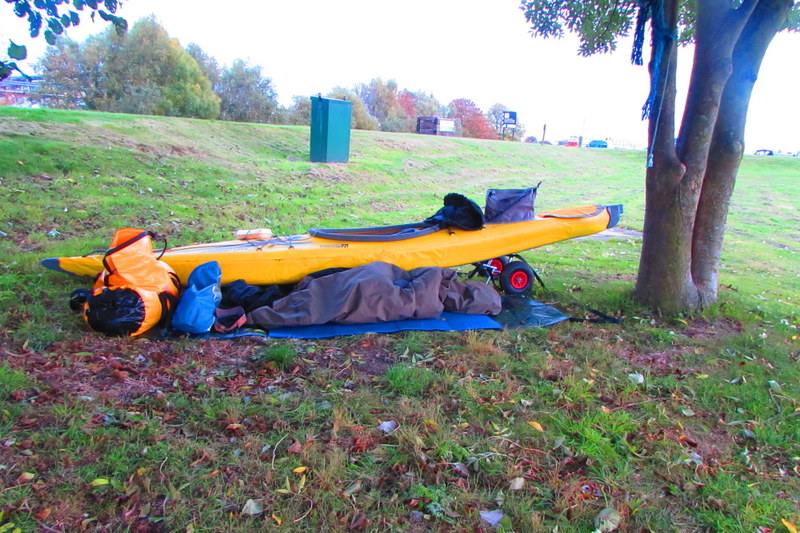 I’ve learnt that there are few if any handy cafes for breakfast on this navigation, so heat coffee and make porridge as I’m packing up. I launch off the mud – shoes and socks off to push out into the cold water. It’s another crystalline autumn day. The sun rising and the air dry. There hadn’t even been dew in the night. I’ve been incredibly lucky with the weather on this trip, I think, happily forgetting the three days and nights of rain back on the western slopes of the Pennines.

Ducks lift off the surface of the water ahead of me. Fish plunge down from the surface of the water as I pass – I think of the anglers who’ve told me of the 25 lb pike they pull out of these and the L&L Canal waters. There’s the slightest of current, and even better a following westerly wind. Turning at one point when I stop to take photos of a male sparrowhawk, fresh minted in russet and slate grey, sitting in a willow tree being mobbed by magpies I see a narrowboat chugging slowly along behind me. Within a mile it’s caught me up on a wide bend in the river, just as another narrowboat with a plastic cruiser hitched to its side and a bicycle on the roof comes up from the other direction. For a moment the three of us form what constitutes rush hour traffic in the slow lane of the canal. Both take twenty minutes to pass out of my view around bends before and behind me. I’ve got twenty miles to go to Goole and a deadline of the following midday. I can afford to take things easy. I drift a while, pushed along by the breeze.

Ahead I can see industry. Canal industry, only recently decommissioned. The coal to the power station on the right hand shore was delivered in rows of barges pulled by tugs until not many years ago. I float up to the immense machinery that used to lift each barge as I was pulled through a ‘corridor’ and tip its tonnes of coal onto the conveyor belt that fed the furnaces. Nowadays trains I could see along the wharf moving slowly through another building fulfil the same function. Ahead was Ferrybridge. I passed beneath the central arch of the 1797 three-arch bridge, and under the adjoining modern bridge and between the towering walls of the flood lock, its gates at both ends open. Looking back I could see the eight cooling towers of the power station overshadowing bridges, lock and town.

I kept paddling past the immense building of Kings Mills, where the flurries of wind had scattered leaves across the surface of the water so it was like paddling across an intricately woven autumn hued rug. Knottingley and the possibility of an early lunch was a temptation overcome, on the promise of getting a late lunch at the Bay Horse a few miles further on.

Deferred pleasure is meant to be all the sweeter, right? But it can also mean no pleasure at all. I moored – the luxury of just tying the kayak to a ring and not having to haul it out – and the Canal And River Trust’s maintenance yard at Heck Bridge where CaRT engineers Keith and Mick were preparing their boat and crane arm for a foray up stream to work on the lock gates in Leeds. I walked the quarter mile inland to find that I was either too late for lunch by three days or too early by three days. Sunday lunch only.

I pushed off again, passing a huge pile of rubbish and jetsam that the CaRT have pulled out of the canals. Amongst them shopping trolleys. I’d seen very few of them in the waters for the past 140 miles and wondered if the breeding season for canal shopping trolleys had been a poor one; seemingly they had gone back to being a land based species and migrated to here, with a little help from the CaRT.

At Pollington Lock, the last of my trip, I pulled out again and brewed up soup and ate biscuits and cheese for a very late lunch, sitting in the sun as a large black cloud rolled towards me and then considerately veered off to the north. The trolley with two sound wheels was rolling nicely as I pulled the kayak past the lock to relaunch, stopping to talk to two fishermen, Ian and Callum who had sit on top kayaks they fished from at times. The cast interested eyes over the Elite, thinking of its practicality for doing longer trips and camping out.

Another mile and the canal was running parallel to the Dutch River, a dead straight dyke dug in the reign of King Charles I to drain the southern marshlands. I’d been paddling through an interesting mix of modern farming, old industry, closed down mines – the land under the CaRT yard and along the canal was subsiding slowly into the emptiness below – and power production. Drax power station had been on the horizon to the north for most of the afternoon and there were wind turbines turning in the westerly winds.

The navigation too was running dead straight now towards Goole and the tidal waters of the Ouse. I could see far ahead into the distance and into the gloom of the late afternoon. Allowing me to see what I realised were proper navigation lights on a big boat powering down the corridor of water. Red and green to the sides and a central white light. It was one of the commercial boats, Exol Pride, still using the waterways and in this case bringing some kind of oil from the coast, along the A&C to where it turned off south towards Doncaster at the New Junction. I pulled to the side and as the skipper saw me he powered down. There was still a big wake. This was the first seriously moving water with waves that I’d faced in the kayak. I had no idea what to expect but felt confident. And rightly so. The bow lifted over the first wave like a swan and rode the closely spaced chop easily. I’d wondered if I was going to regret not having my spray deck on, and end up with a cockpit full of wash. Not a bit. Not a drop. The wake, though, bounced off the iron sides of the canal in a quarter mile of clapotis, the reflected waters colliding with each other setting up standing waves and rough chop.

The Black Horse was an oasis in many ways. The first waterside pub I’d passed since leaving the Leeds and Liverpool, its lights a warm welcome beyond the canal bank beer garden, a marina adjoining. I landed, trolleyed the kayak to the beer garden and walked in. It’s always a bit of an ice-breaker strolling in from the dusk wearing a life-jacket and looking wind-swept, water-stained and wind-blown. There were four men drinking at the bar, and a group of children playing at a table. There was a feeling of welcome and warmth. Sharon pulled me a pint. And gave me the bad news – the kitchen wasn’t open. But then gave me the good news – there was an order going out to a take-away and I could have a look at the menu and add on whatever caught my fancy. I ordered another pint and got talking to Phil, who with Sharon had re-opened the pub a few years back, taken over the running of the marina and started a small caravan park. Dave was one of the men drinking with me. Staying in a caravan whilst working in the area. Ivan, another man at the bar was working on his boat in the marina, and we found a common interest in the early days of windsurfing. We were a friendly group sharing pizza and chips. A happy last night before I covered the last few miles to Goole in the morning.

Phil, a generous man whose energy and humour seemed undiminished by serious illness, suggested I make camp in the beer garden next to the canal. He gave me the code to the caravan shower block, ‘so you can have a wash and a Tom Tit in the morning,’ before Sharon and he saw the last of us out and locked up.

I rolled my bivi bag out by the kayak and slept. The night was cold. Autumn was finally getting, well, autumnal. 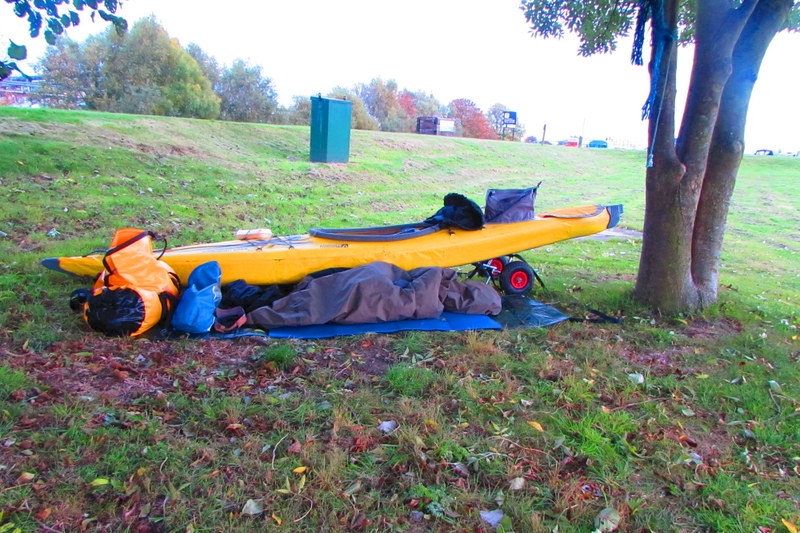 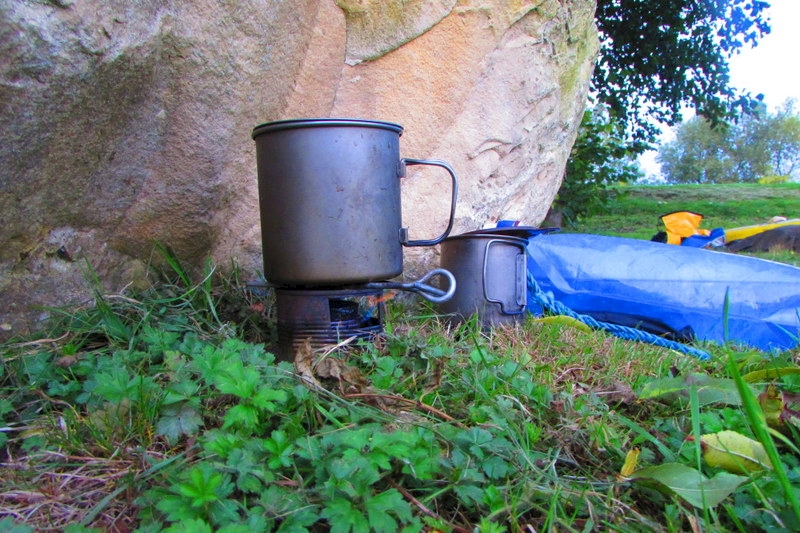 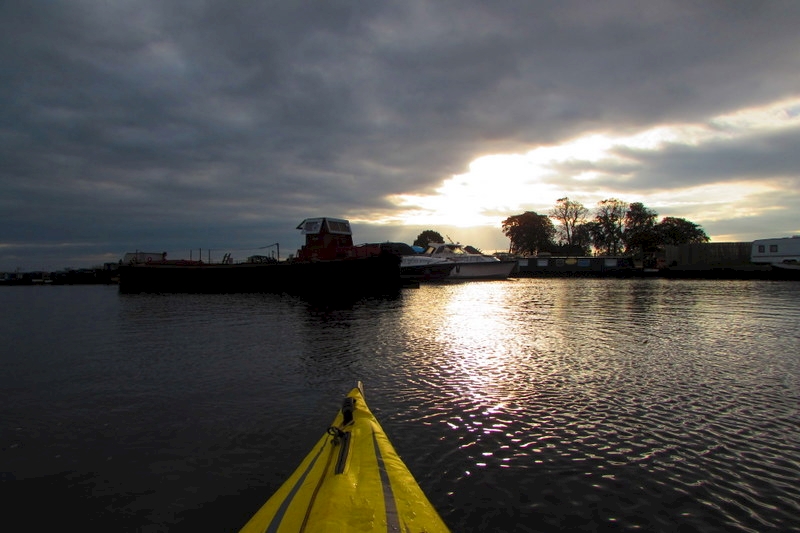 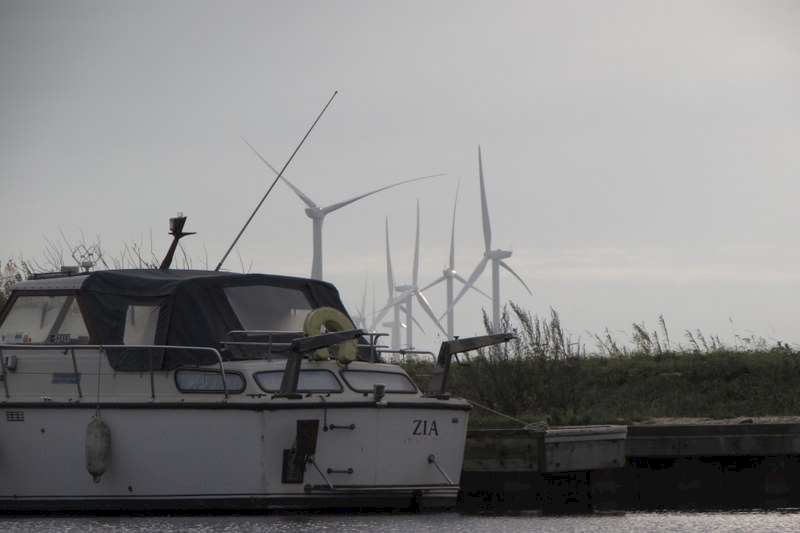