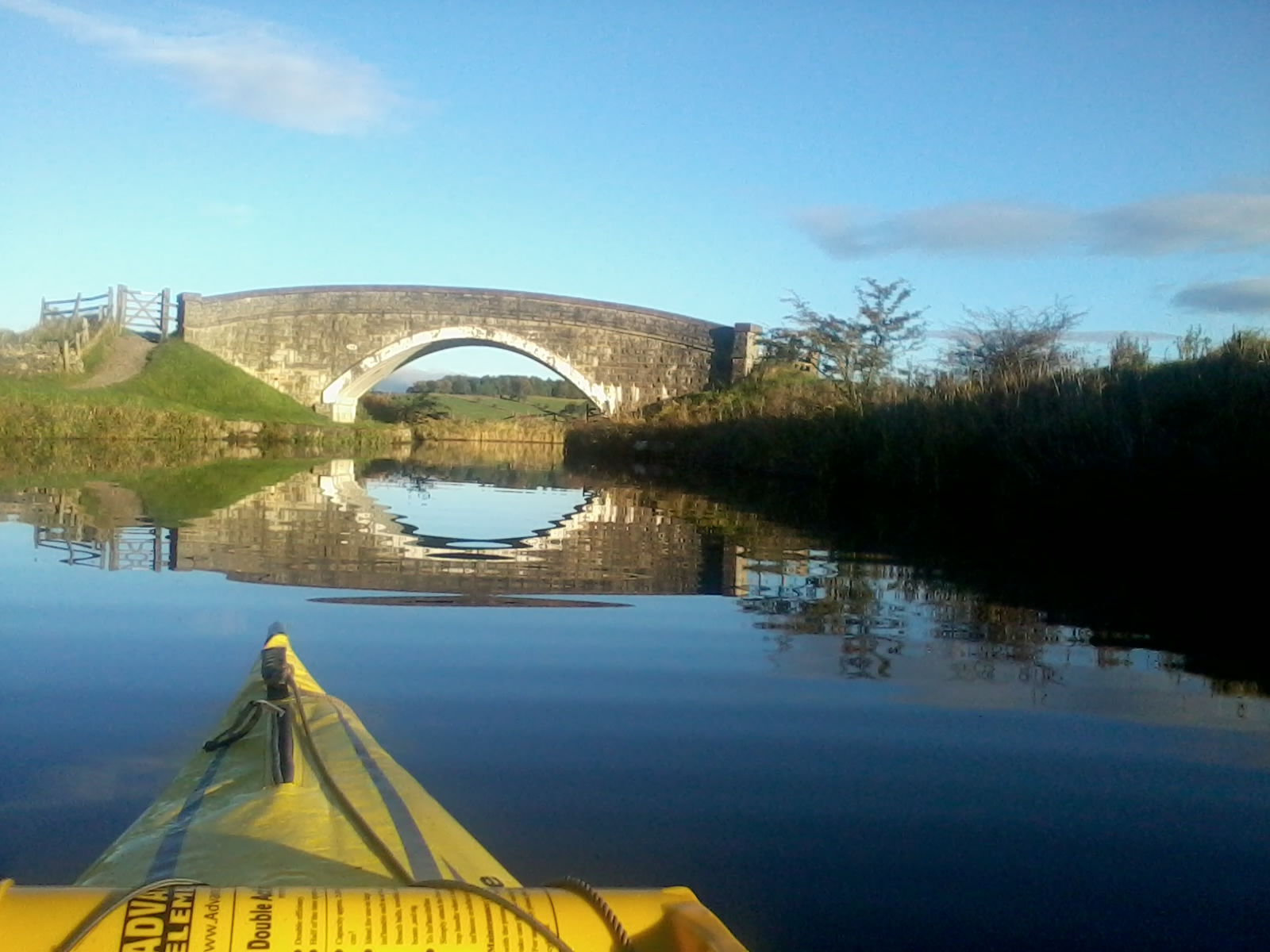 The perfect place to pull out and sleep appeared late last night. Tempting as it was to keep paddling ever deeper into the night, it was also tempting to stop. In the moonlight I saw a grassy niche in the shelter of an ivy wreathed wall, a small stand of trees at one end, off the road and off the canal.

I was up early and packing when Mick with his husky stopped for a chat. "Does the dog need a lot of exercise", I asked. "I take him out three times a day, everyday," said Mick. "Three times a day. That's a bit of walking, but if that's what he needs................." "Oh, he doesn't need it - I do." There were two big employers in Barnoldswick; Rolls Royce and Silent Night. I'd passed them both the night before. Mick worked for the bed company as a maintenance engineer. "Great company to work for. Thirty years I've been with them. I was cheeky when I was young - didn't apply for job usual way, but knocked on the door of the maintenance office with my CV...started straight away." He strode off into the sun. Happy with the day and with his life and with the weekend he'd spent walking in the Lake District. But even cheery Mick cast an envious glance at the kayak and said he wished that he was setting off down the canal, coast to coast, with no timetable.

The night before in the Anchor a couple of boaters with an English Pointer (one always makes friends if one gets someone's dog breed right) had recommended a cafe for breakfast a few miles on from the locks at East Marton. "It's the bridge after the double bridge." Sometimes those kind of directions sound obvious and then one ends up wondering if the 'double' bridge is two bridges close together, or the local name for an otherwise nondescript bridge or nothing to do with 'double' at all. The Double Bridge was exactly what it was called. An arched bridge built on top of another arched bridge. East Marton was a livery yard with horses being exercised and mucked out and put out in fields. And a muddy track across the bridge up to a few houses, one of which seemed like a very small cafe shop.

I parked the kayak by a wall outside and went in. Appearances were deceptive - centuries old stables and barns had been opened up, the ancient wooden stalls still in place to create alcoves for tables, original small windows letting in shafts of sunlight. The Abbots Harbour Cafe had once been a staging post for goods and travellers moving between two local monasteries. The full English breakfast and large pot of coffee were of, welcome, Friar Tuck proportions. In a tiny alcove behind a pane of glass were tokens, coins and amulets including a child-sized leather shoe, Medieval in date?, found when the wall had been knocked through between stable and barn. "I'm not sure what I believe, but mediums and other people have seen figures in here - a crouching man in that corner, and where you were sitting a cavalier," I was told.

Back on the water the canal meandered and twisted to follow the contour line of hilly country. Chill air and warm sun. Buzzards rose on the thermals and called. A dipper bounced along the stones on the bank at one point - he/she finding the shallow fast running waters needed to feed in the streams that run into fill the canal up at this height. In the few days I'd been paddling and in the 400 plus feet I'd climbed autumn had arrived properly. The waters mosaiced in fallen leaves. Birches and beeches turning to yellows, reds and browns. One stretch of this remote country ran between small woods of pines, birches and oaks. Robins, chaffinches and wrens called and sang in the trees. A troupe of long-tailed tits cavorted through the branches. But there was also the rattle of migrating thrushes - the sound of coming winter. There were quite a few locks along this ten mile stretch, and rather than coming in flights and staircases they were mostly spread out, a half mile apart at times. It made for difficult choices - when I'd pulled out did I then relaunch to paddle for ten minutes to the next lock, or just walk the kayak on the trailer to the next lock, and then - yes? no? - to the next lock? The locks, in the warm sun, were distractions anyway.

This stretch of the Leeds and Liverpool has some of the most attractive rural canal scenery, some long pounds without any locks and several hire-boat companies, and quite a few small marinas and stretches of moorings. It was the busiest stretch i'd come across so far. The number of boats going up and down the locks were keeping Seasonal Lock Keeper Nigel Heseltine busy. Though he'd lived and travelled aboard his own boat, Sloe-Mo-Shun, for a while he'd only been working for the Canal and River Trust for a bit over a month. "I needed to change jobs - I was a workaholic, far too stressed out," he said, "This is the perfect job for me, and i've lost a stone already." Covering a series of spread out locks, Nigel walked and cycled between them, raking weeds out of the gate mechanisms, helping new hirers operate the paddles, and making sure that boats doubled up in the basins and halved the use of precious water.

The day was slipping away. Pleasantly but my planned midday arrival in Skipton was missed and I'd be lucky if even hard paddling got me to the town before the end of the afternoon. My luck seemed to be holding as the afternoon and the miles slipped away. For all its joys this stretch of the Leeds and Liverpool is infamous for its swing bridges. Doing what their name suggests, for boaters they're a frustration; requiring a crew member to hop ashore and battle the huge weight on its turning pivot to swing the bridge around and into the bank. I'd passed several and with the water level low i'd been able to limbo dance under each one. But with Skipton on the horizon I could see that the next swing bridge was far too low to get under. But then as I came round the corner the bridge began to swing open as if by magic. A boat coming the opposite way at just the right time had given me free passage. I rejoiced too soon. I was in Skipton - converted warehouses, industrial chimneys, moored up narrow boats, church spires around me - and relaxing into the last few hundred yards to reach Pennine Cruisers where I was going to pull out, pick up a package and meet a friend. And then a swing bridge I'd overlooked on the Nicholson guide map. It's beams almost touching the water's surface. There was nothing to do but land, take everything off the kayak and heft it all to the other side.

In the past week I'd crossed the Pennines and covered a hundred miles. Skipton was a chance to take a couple of days break to have a shower, wash clothes, sort out kit, make a spray deck, climb high into the hills. Within fifteen minutes I'd transfered the kayak into a piece of luggage, bundled all my other gear into a bag, put on my dry shoes and fresh socks and was in the Boat House with a pint. You'd never have known that I'd spent the last week paddling along a hundred miles of canal, and sleeping under a tarp in fields and woods, I thought rather smugly, pleased with my almost instant transformation from kayaker to chap in a pub with a couple of bags. Oh, except you would have known. I'd got so used to wearing my buoyancy jacket that I'd forgotten to take it off. I still looked like a kayaker, just one without an obvious kayak. It was time for a couple of days of shore leave, before continuing onto Leeds and then from there transferring onto the Aire And Calder canal and covering the final thirty odd miles to Goole. 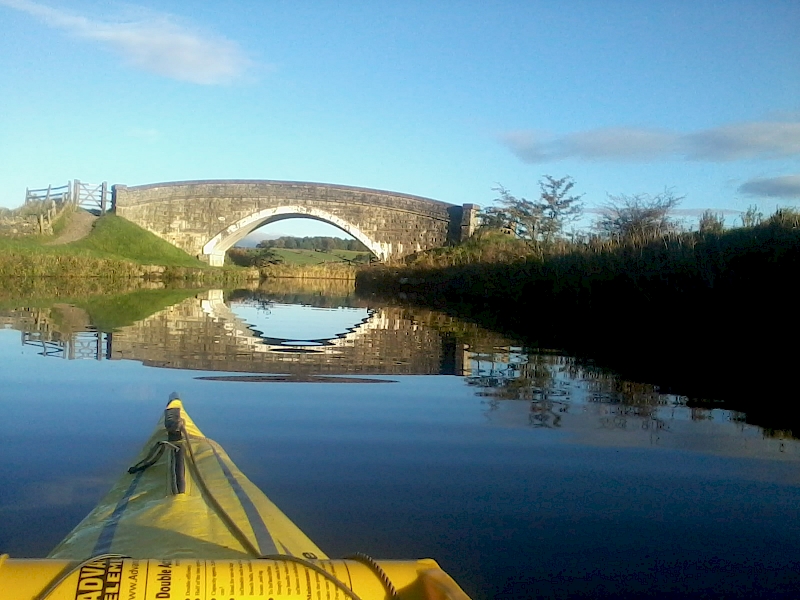 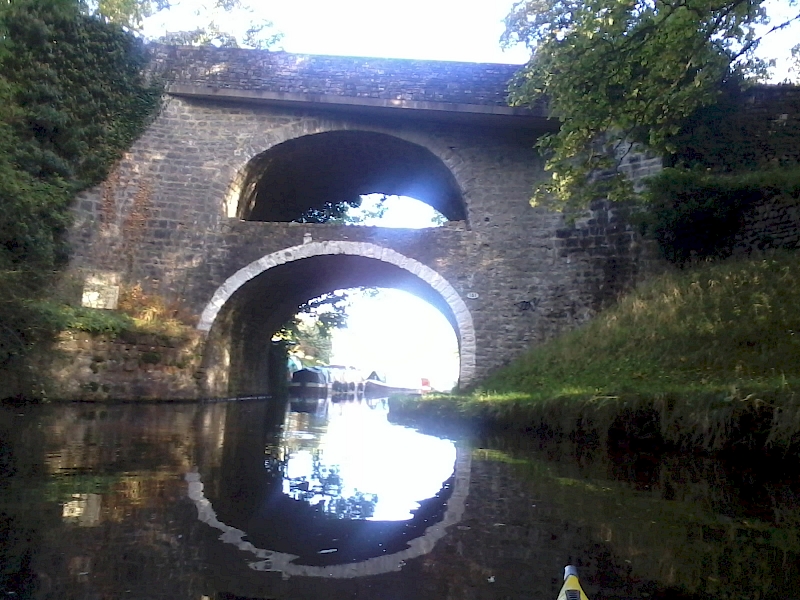 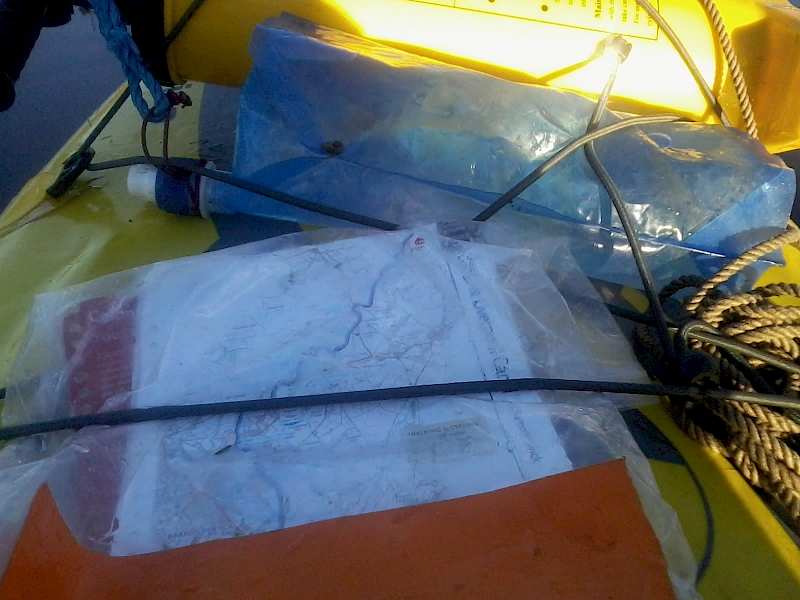