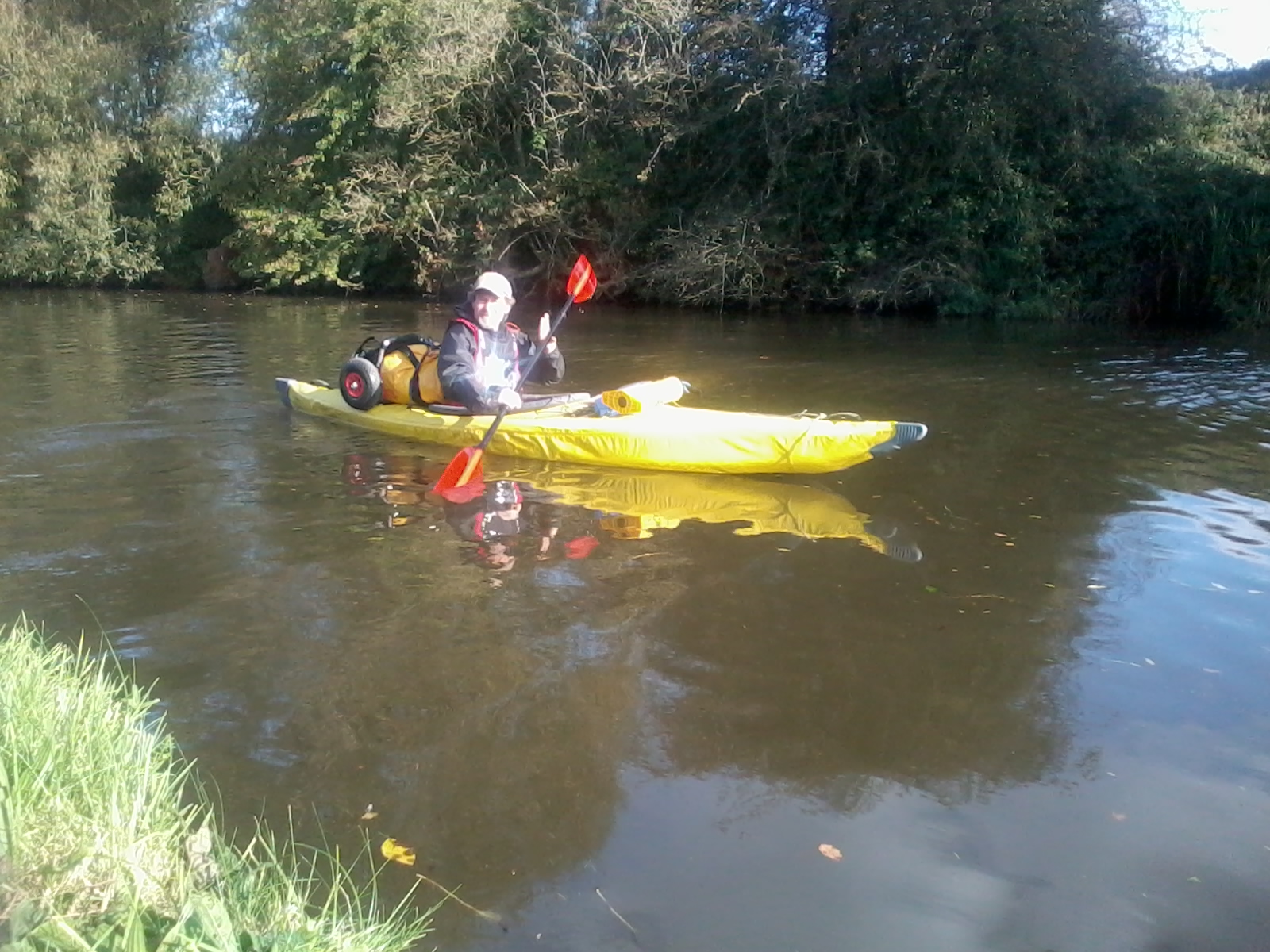 On every trip there's a day - usually around the third - when for no real reason morale dips and one wonders what one's doing. So it was this morning. The third morning of the trip. I lay under my tarpaulin with an easterly wind blowing into my face and a fine drizzle falling and didn't feel much like getting up. But then i also didn't feel much like lying under a damp tarpaulin for the morning either. The thing about the 'third day blues' is that experience shows that it's just a temporary downer before one settles properly into travelling.

Once on the water i found that the head wind was more of a head breeze, and in my waterproof cagoule and trousers i was mostly dry.

I had skipped breakfast, though, as there was a cafe a mile ahead, according to the oracle, Nicholson's Guide. There was but it was closed. 'Don't worry, there's a restaurant at Botany Bay just a coupe of miles up the canal. That wasn't too bad, so off i paddled. A mile or so on i passed the Wool Boat. And then stopped passing it and stopped for a chat with Carol and Colin who do all things wool, though mostly hand-knitting commissioned sweaters. Traditonal boaters' ganzies with oiled wool, and Technicolor Dream Jumpers in a myriad of bright hues. Colin was wearing one. "They are bright those jumpers, but it means i don't lose him in Tescos," said Carol. Botany Bay was a couple more miles at least, they said.

I was beginning to earn my breakfast, i felt. But was already in a far better mood. After, well, probably close on two more miles i met another kayaker coming against me. First trip out. Being paddled by a retired (and still young) fell runner who's knees had gone and who wanted another form of hard exercise. He'd been doing a six mile round trip. Botany Bay was just under two miles from where we met. He was right.

A retired mill factory turned into a four floor shopping experience, i found that the restaurant was on the top floor. I left the kayak parked in the garden centre under he watchful eye of Ciara Moloney who was selling ice-cream from a shed near-by. I got into the lift and got out in - Winter. And Christmas winter to boot. The whole top floor had been turned into ice grottoes with Christmas trees, baubles, penguins, ice floes and the rest of the Decemberist stuff. It was disconcerting and took me a large breakfast and several coffees to get over.

When i returned to the ground floor i found that there had been another seasonal variation. The wind had gone south west, the sun was out and the skies blue. Ciara had sold a good number of ice creams.

Back on the water i spotted a man and a dog walking the sun lit canal. He had a good camera around his neck and was taking sensible, considered photos. On a hunch i asked if he'd take my phone and camera and take a few shots of me and the kayak in union on the water. He snapped away. I posed. He shot some video. His dog, Fossie, ran up and down the tow path, intrigued by this strange water creature.

Another mile or so i reached the bottom of seven locks. Locks in flights and staircases are great. I take the boat out once, wheel it past a whole lot of locks in one go, relaunch and go on my merry way (and by this point i was merry and so was my way; my mind had recalibrated and accepted that this paddling lark is what i'd be doing for the remaining 100 plus miles come rain, shine, wind or snow.

As at Wigan, the top lock had an adjoining pub, the Top Lock. The sun warmed the chairs and tables outside, and the hikers, dog strollers, children walkers and cyclists sitting in and at them. As well as a local fire engine crew who had parked their truck outside and stopped for a chat with friends. I joined them.

An hour later as the sun dropped and the temperature with it i relaunched and set off into the evening. I was relaxed. There were only five or six miles to Blackburn and despite an initial plan to paddle through the town at night, the thought of mixing with Saturday night revellers as i towed my kayak past the flight of locks seemed a bit too 'party' for my mood. Perhaps it was the CRT signs along the canal forbidding horses, motorbikes and guns that made me think it better to spend an evening in bucolic tranquility rather than traversing the excitement of a nightlife city.

I was still in deep countryside, hillside on the right bank and drop down below the right bank. Meadows, trees. Old stone bridges carrying small roads over the canal, or joining one field to its neighbour across the water. I passed a little hamlet of boats moored along the towpath. A bearded guy off the boat with the motorbike outside it was cheery in his greetings. Another boat was painted in Rasta colours. That was cheery too. At the next bridge i pulled out. Set up my tarp, gaining a bit of height by separating my paddle into two pieces to use as poles. Spirit stove on. Hot soup and oat biscuits and cheese. A tawny owl calling in the trees below in the valley. A sudden flurry of white in the moonlight as two swans crashed down into the water. Full moon and everything pale lit and ghostly. Dead still. And cold. I was in my bag and half asleep before nine. 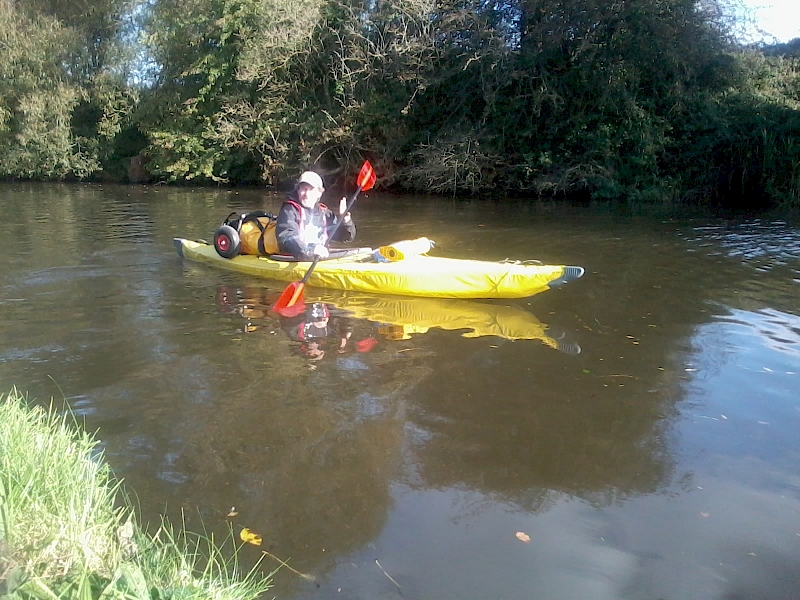 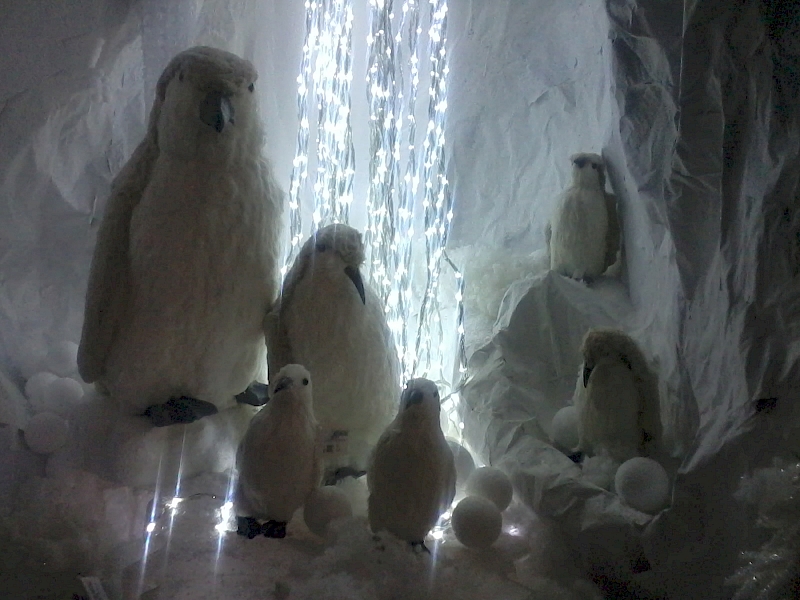 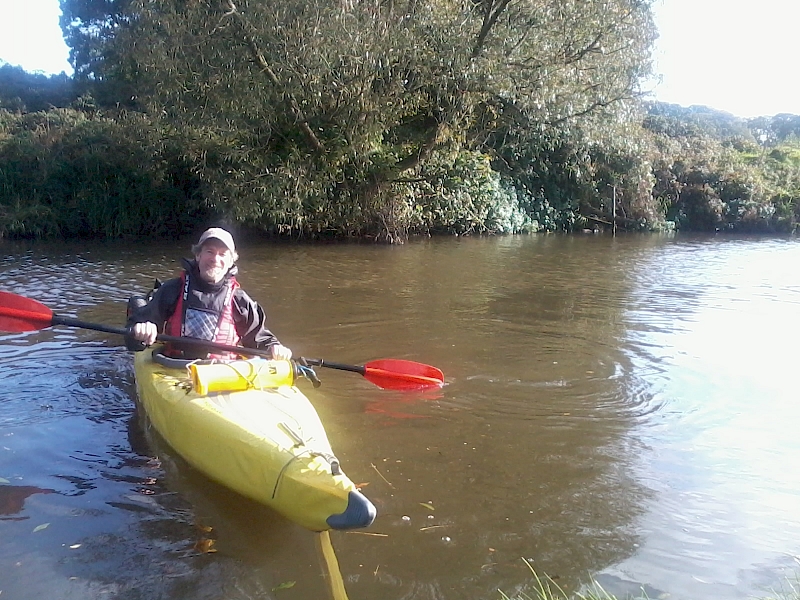