DAY 5 - CALYPSO, CURRY AND A COCKATOO

DAY 5 - CALYPSO, CURRY AND A COCKATOO 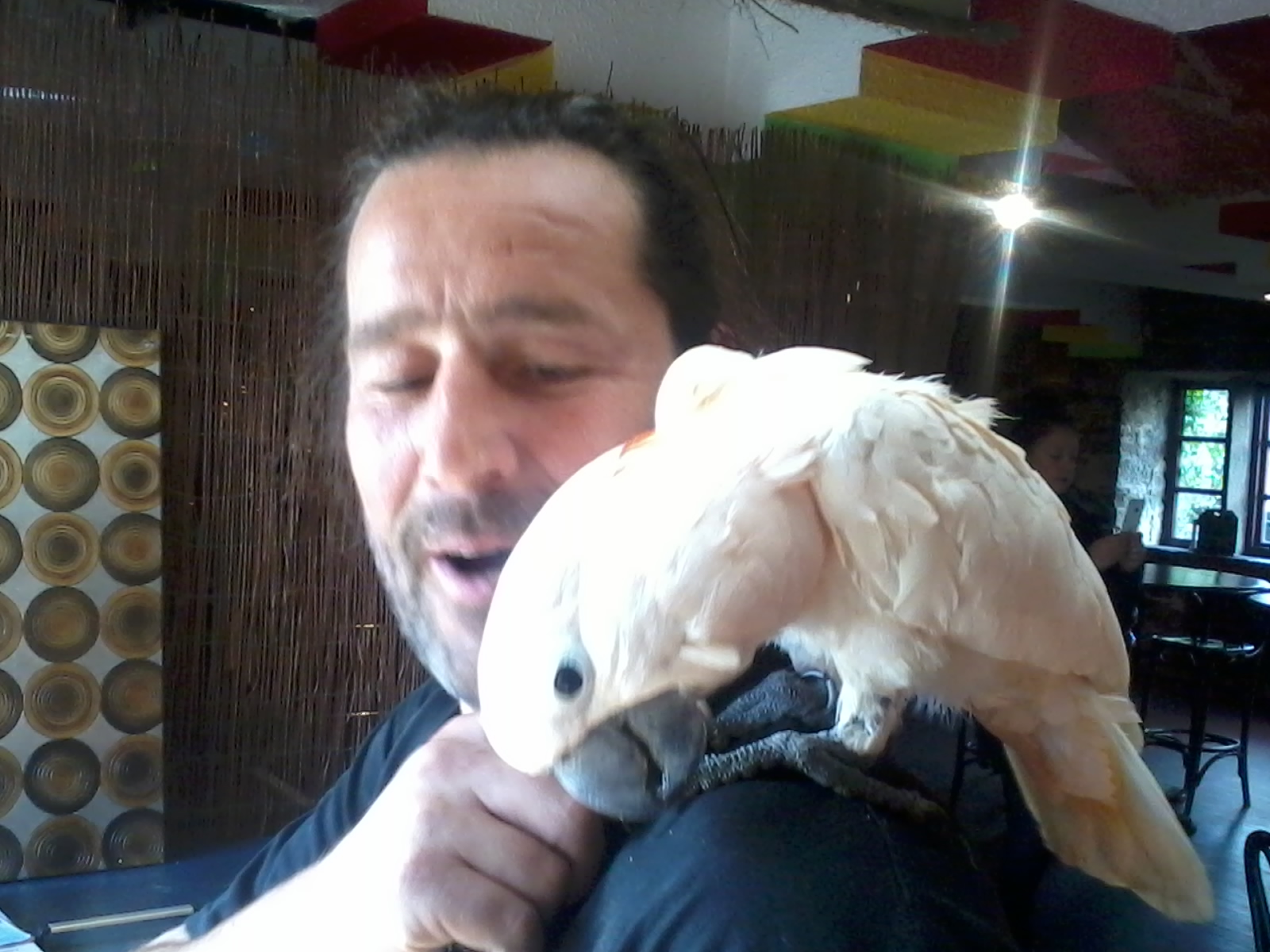 My last post reported me bivi-ed out by a bridge deep in the country side, well before Blackburn, and falling into early but well earned sleep.

BBBBRRRRRRRRRRRRRRRRRRRRRRRRRR BBBBBRYAGHHHGHBBBRRGHHGAGHHGHHG. I was jerked awake by a motorbike, no headlight, careering along the towpath in the moonlight. I could see two figures on the bike. It slowed as they saw the kayak and my tarp, and possibly my startled face. Then accelerated on and under the bridge. Then, i could hear, stopped. This was a bit worrying. Perhaps i was a bit on edge because signs i'd seen earlier on the towpath had singled out for particular prohibition the riding of motorbikes, the riding of horses and the shooting of guns. But equally i was reassured a bit by both the moonlit motorbike tearaways wearing helmets. As opposed to Stetsons. I heard the bike start up again and chug off along the towpath. Possibly a dirty carburetor rather than a pause for discussion on the pluses of banditry.

It was raining when i got up, and there was a sharp east wind - a head wind for me. But i felt in great form. Great form but a little Sunday-ish. The sun came and went. The rain came and went. I paddled but not with great vigour, it has to be said. The rain became heavy. It poured and i paddled on. Then, after only a few miles of wet paddling, i reached The Navigation Inn. What in Ireland we'd call an 'early house.' At eleven o'clock it was already serving pints to a bunch of guys lining the bar, and to me, too, after i'd had a coffee. There were still falls of rain coming and going outside and it seemed rather pleasant to sit inside looking out on them, whilst chatting with men who thought the same as me about looking out on the weather rather than being in it. You want to watch out for the rats up ahead, some bloke warned me when i walked in with my kayaking kit on. The warnings increased in intensity. Huge pike, up ahead. Sharks, why not. U-boats. It was almost enough to put me off getting back on the water. But i was walking anyway for the next half mile to get past a flight of six locks. The sun was out. It was warm work. I put the kayak back in at the top lock, bemoaning the lack of a pub.

Paddled a bit more and came across the Calypso Bar in part of a Canal and River Trust restored wharf building with roofed quays. I pulled the kayak out again and entered the Caribbean. Jamaican lamb curry, coffee, Bob Marley and super friendly people, including owner and chef Dave Wilson and his cockatoo, Leo. What with stories about the prison hole in the building next door, used to hold 'felons' on their way to Liverpool and deportation to Australia, and my realising that I'd seen Dave's Rasta coloured boat moored a mile or so before the bridge where i'd spent the previous night, and then hearing about interesting canal folk from photographer Robert on the nearby Blue Moon to Ben Cummings ahead of me on his 'shed and piano' raft the afternoon rather slipped away. It was time to leave, but then i got chatting to boaters, John and Anne from the Kathleen who'd been to the Super Slow Way's 'A Rhapsody to the Leeds and Liverpool Canal,' a new choral piece by Ian Stephens, and a libretto by poet Ian McMillan, with hundreds of singers, the Brighouse and Rastrick Brass Band and tabla player Kuljit Bhamra. I managed to miss this.

I'd also missed the light, launching the kayak in the cold dark, whilst chatting to fisherman Ian Brackenbury who was just in from a 14 hour day, six rods in their bag, and photos of the carp, pike and tench he'd caught over the past days. The 25 pound pike were a definite possibility - they were accused of not just taking ducklings but whole adult ducks. I made a note not to dangle my fingers in the water. As Ian was leaving, his place was taken by Omani, who was heading out to fish through the night, oblivious to the persistent rain in a light jacket, keen to fish, fish, FISH!

There's a magic to threading the canal's waters in the dark. The quays and bridges and factory walls are given the flat dimensions that allow one to imagine the past onto them as if on a screen. Canal boats, workers heading back from the mills and mines, two centuries of water trade. Then coming out into the country and the sky opening up. It was still raining heavily and though i was dry and warm in my waterproofs, paddling steadily, it was looking bleak for setting up camp somewhere along the towpath. Then the rain eased and stopped. The moon rose above black clouds. The canal was a silvered track ahead of me. Odd splashes and gurgles from the bank and the drip of water from the paddle blades A few miles later one of those old stone bridges carrying a farm path from one field to another. A wall to shelter my bivi against. I landed and set up the tarp, and boiled up water for soup and coffee. It was ten and the moon was high lighting the canal waters, the surrounding fields and beyond them the high ground of the Pennines. I was nearly at the top and soon would be paddling downhill to the east coast. 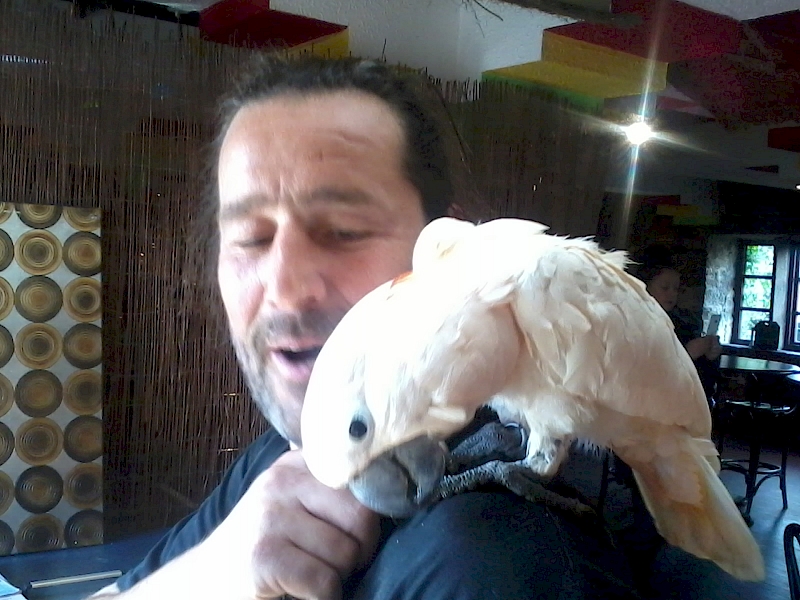 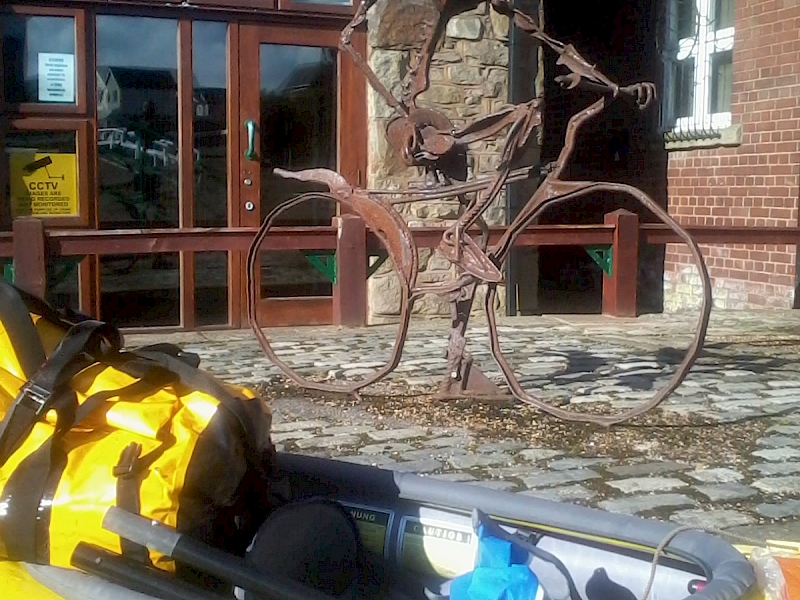