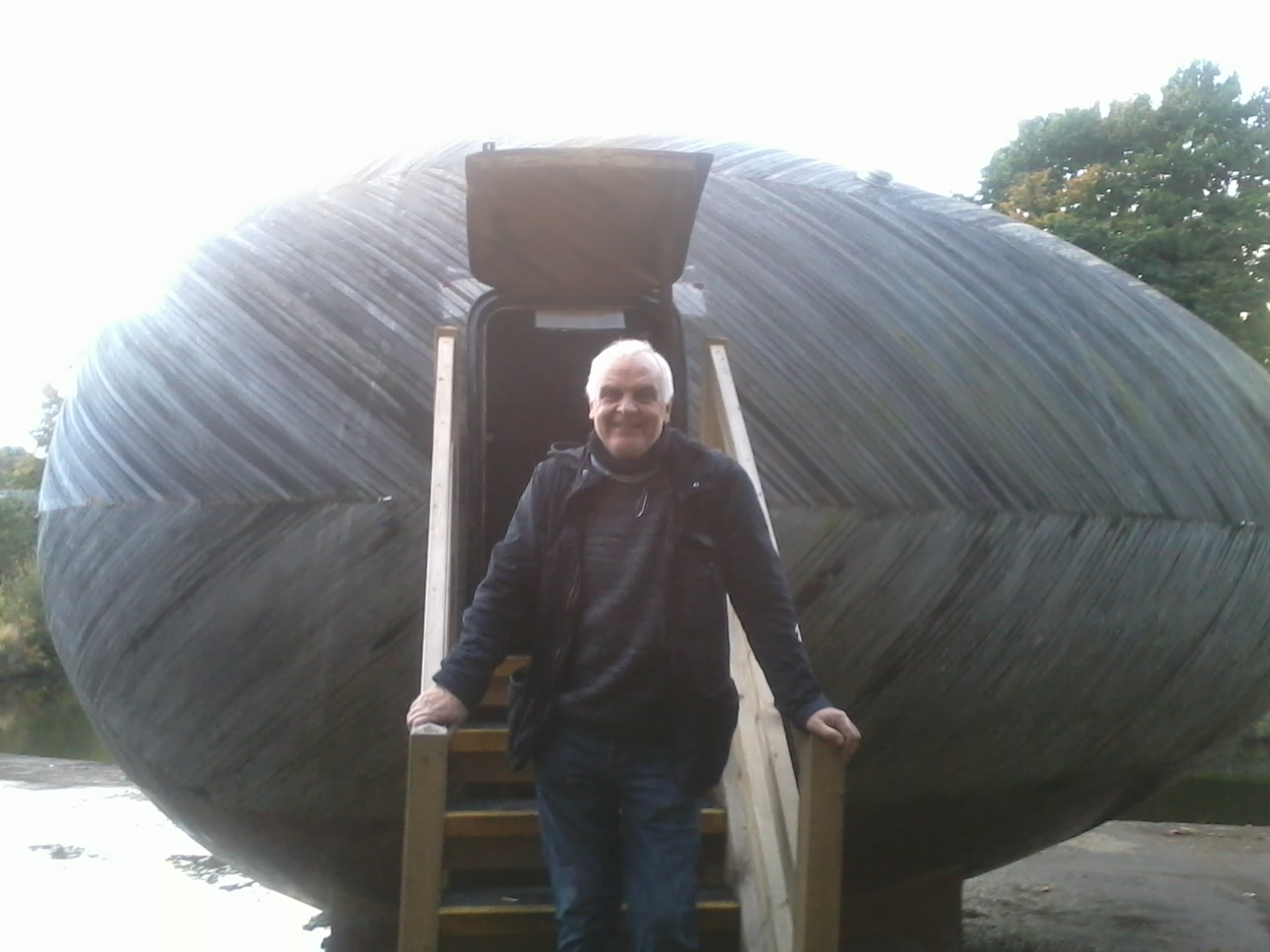 Rain at night, when I'm under my tarpaulin and warm and dry, then dried up and clear by dawn when i get up is perfect. And this morning was perfect. Water boiled for coffee in the time it took me to pack up.

As I was sipping coffee and looking at the far distant hills, and saying good morning to a swan, a walker came under the bridge, stopped and said, 'It's you again!' 'Again from when?' 'Yesterday. I passed you south of Blackburn in the morning. I was walking.' I remembered him now. I'd been talking to someone, John Taylor about an international society of camping stove collectors and enthusiasts, and my home-made tin can spirit stove, when this chap had stroden past with a cheery hello. This morning he stopped to talk. He always took his daughter to school on Monday and then walked back to Blackburn - a fair few miles. He walked a lot. He looked wistfully at my rather basic camp, and the kayak, and muttered something about wishing he was free enough to just head off. I gathered he wasn't that free, and uttered a bit of empty encouragement. 'Well, I'll get on then,' and he gave me an awkward clap on the shoulder. 'Good luck.' I find that the kayak does that to people, men especially; they see it as a way of escape. Which of course in one way it is. Though as much as letting one paddle away from things it can - in my good fortunate - carry one into adventures and happy meetings and contemplation of the world around one.

There's an odd thing about being on the canal in a kayak. I'm not high enough up to look over the embankments and down into the countryside either side, and often in this hilly region, deep into valleys. So i have long, telescope vision up and down the canal's length, but a microscope view of the plants, insects, birds, stones and - inevitably - flotsam either side of me.

It was cold when I launched and drizzly. I'm seeing a lot of sparrowhawks on this trip -canals seem to suit their stealth bomber hunting method, and several times one has jinked over the bankside hedge hoping to surprise a small bird, and instead being surprised by finding me on the water. I'm noticing drowned hedgehogs depressingly often. A live dipper, and more kingfishers, and high overhead a single raven all cheered me up.

I was equally cheered to round a corner and find a cafe by a pontoon. Part of it was in a sort of open alcove, and through the door there was a fire, plugs by tables for recharging phones, and shelves of second-hand books to swap and buy; all signs of a boater-friendly haven. Mick and Haremi were welcoming, and spoke fluent Japanese to each other when not speaking English to me; not so surprising for Haremi who's Japanese, but more so in Mick's case. If you'd suggested an hour earlier that I'd be having a rather deep conversation about how Japanese characters give a different feel to words compared to the western alphabets, and so how haiku worked and why they were essentially untranslatable, (with examples in Japanese and English) I'd have thought it unlikely. But then the canal seems to throw up one unlikelihood after another and I'm getting used to believing six impossible things before breakfast.

It was raining hard when I left. Cagoule, hat and resigned face for an hour. I passed a group of young CRT and Prince's Trust volunteers clearing the towpath in the drizzle. As they cut back the weeds around a mile marker they told me they were burying a small time capsule. Can we have another of your cards to bury in this one. I handed one over, thinking, well I'm bad enough at answering my phone nowadays, so not much chance if someone calls my number in fifty years time or whenever the capsule is dug up.

Then hot sun and strong paddling heated me up and i was down to tee-shirt and grinning. I was racing to Burnley to make contact with the Super Slow Way arts project based on canal locations and subjects.

Racing on a canal, in a kayak, is always relative, and never more so than when the need for the route to follow the contour takes one around three sides of a square to get back to within view of where one was an hour before but just a few hundred yards further over. But still I raced. I shot into the 599 yard Gannow Tunnel, head torch illuminating little but black water ribboning off to a distant hoop of light. I came out into a different world.

Burnley probably has the greatest length of canal threaded heritage industrial sites on the Leeds and Liverpool. High walls, chimneys, factories, mills, towpaths, alleys, bridges and bridges off bridges, wharfs. I made it to Finsley Gate Bridge in time.

Climbing up a high wharf wall I met Ella from Super Slow Way in the shadow of the EGG! Artist Stephen Turner worked with architects, engineers and craftsmen boatbuilders to create an egg shaped boat-studio-house. He lived in it for a year on the Beaulie River (www.ExburyEgg.me) after another project living and slowly exploring an abandoned tower far off the Kent Coast over a six week period.

With perfect timing I caught Stephen as he visited the egg, now on shore as a canal art instillation. Jospehine Taylor and her son Steven were curators for the egg, and we all climbed into the egg. Spacious, round/ovoid, simple, cosy, with the warmth of wood and fabric. 'Gosh, it's just like a vardo,' I exclaimed involuntarily, thinking of Gypsy bow top caravans. Josephine knew exactly what I was talking about, to my surprise. "I'm Roma Gypsy, our family are...horse dealers, and that's what I thought the first time I came in her. I love it in here. Look at the bed across the end, that's the way it was in the vardo.' We fell to talking about Reading wagons, Queenie stoves and horse fairs at Appleby and Stowe.

'Borrow this tent, if you're going to camp here for the night' urged Stephen. 'The gates are locked so you'll be fine.' Sleeping in the middle of a town. That would make a change. Stephen, Josephine and Steven locked up and left. In the dark I dropped down into the kayak and paddled back to the Inn on The Wharf for a meal and a pint. Maybe two. Just two and back for an early night. But then I met Pete Booth, engineer and brewer at his Irwell Works Brewery and he was too good company to head away from. Talk of mandolins, motorbikes, Triumph Heralds and a particular skill and enthusiasm of his, curries. He and a friend used to run a curry restaurant and cater for festivals, though the main reason seemed to be having an opportunity to come up with dreadful punning names for their creations; deer curry - more expensive than the others; Tarka masala - like a tikka but a little 'otter; the Geoff Boycott - you still get the runs, but slowly.

It was closing time when I relaunched the kayak and climbed in to paddle the quarter mile back to the egg. Misty drizzle drifted down diffusing the light and turning the darkness into a deep grey glow. The bridges, walls, lanes and factories made strange geometrical shapes, like an Escher etching.

It was hard scaling the high wharf wall, and pulling my kit and kayak up and ashore. The tent was one of those sprung hoop affairs that snaps from a round flat shape into full tent in a second. As it sprung open it caught me neatly under the chin and in the crotch. But how welcome it was. Through the night the rain got stronger and stronger until it was drumming down like a fire hose. I awoke now and again through the night to enjoy the sensation of being warm and dry. 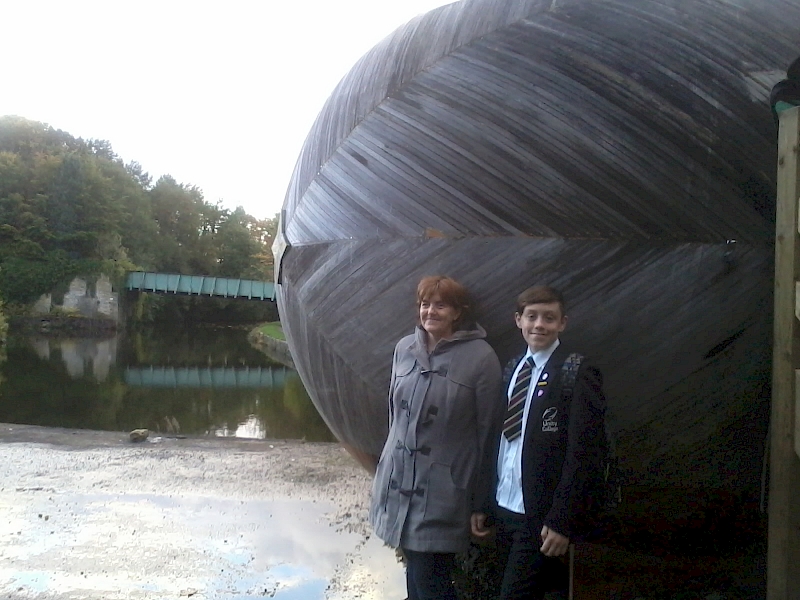 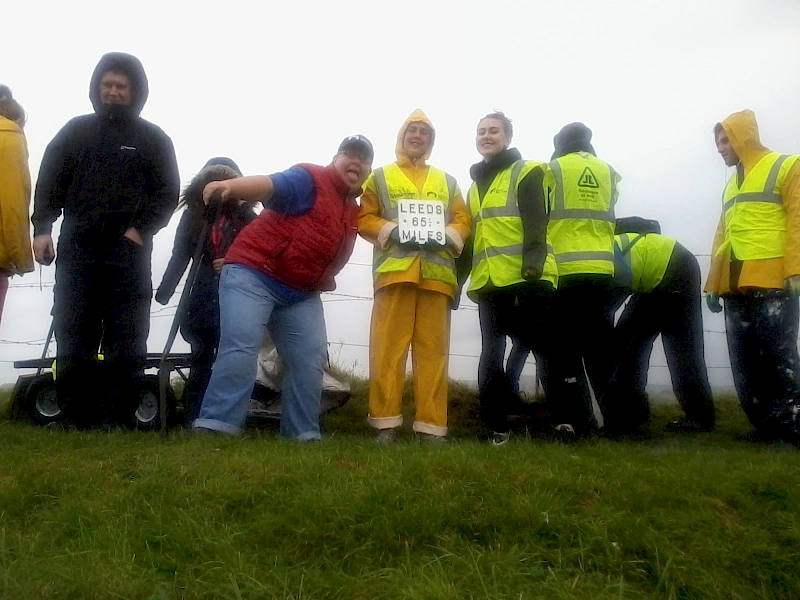 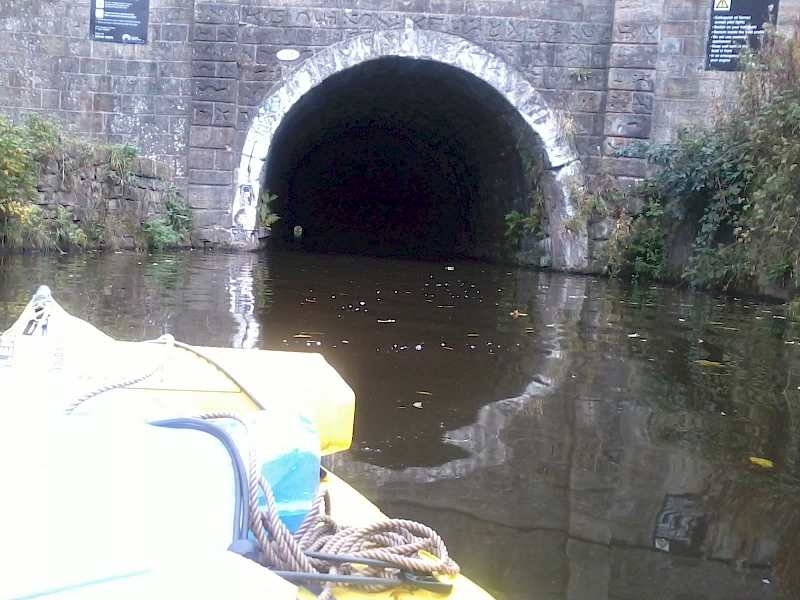